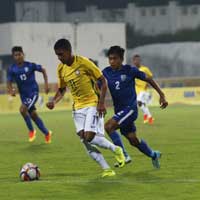 Already out of reckoning, hosts India produced a spirited fight before going down 1-3 against favourites Brazil in their last match of the BRICS U-17 Football Tournament in Bambolim on Thursday.

Brazil took the lead as early as in the second minute of the match through Brenner Silva’s powerful shot from outside the box at the Athletic Stadium.

Down by a goal, Nicolai Adam’s boys attacked with vigour and Komal Thatal scored the equaliser in the 19th minute with a curling shot from the left flank.

India’s rejuvenation was cut short when Brazil regained the lead in the 30th minute through Marcos Santos’s strike.

A minute later, India were denied a penalty when Komal was brought down inside the Brazilian box.

The Indian colts picked themselves up as the match progressed and at the half-way point trailed Brazil 1-2.

The game was largely contested in the midfield in the opening minutes of the second half.

In the 66th minute substitute Joysana Singh robbed Brazil off possession and burst onto goal.

Joysana cut inside the Brazil box, but instead of shooting, he tried to find an onrushing Aman Chetri but before he could cause any damage the Brazilian defence cleared the ball away.

Ten minutes later, Joysana Singh gave the Brazilians a scare as his shot from outside the box went inches wide.

In the 82nd minute Brazil scored through Vinicius Oliviera to double their lead and wrap up the match.