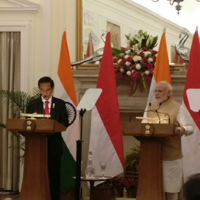 Both countries have agreed to cooperate in maritime security to ensure the safety of sea.

Earlier today, Indonesian President was accorded a ceremonial reception at the Rashtrapati Bhawan.

The Indonesian President’s 2 day visit is the first since former President Susilo Bambang Yudhoyono’s trip to India in 2011.

He also visited Rajghat and offered respects at memorial of Father of the Nation Mahatma Gandhi.

Ahead of his state visit, President Widodo had said he sees closer cooperation between Indonesia and India in defence, security and anti-terrorism fields. The Indonesian President had also said Indonesia is also willing to consider a bilateral trade pact with India.

Do’s and don’ts to prepare yourself for Cyclone Vardah
India thrash England by an innings and 36 runs, clinch series