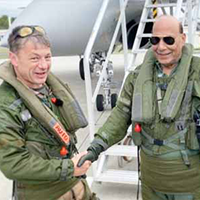 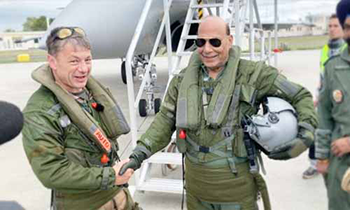 On the last day of his three-day visit to France, India’s Defence Minister Rajnath Singh invited French defence industries to set up production bases in India. He also pitched entering into co-production of high-end defence equipment.

While addressing the CEOs of the French defence industry, Rajnath Singh said, “We want collaboration to modernise our shipyards and defence platforms by infusion of technology. French firms can make India their base for production of defence equipment not only for India’s large market but also for export to other countries.”

He also spoke about the tax reforms undertaken by the Government, particularly underlining the significance of implementation of a single Goods and Services Tax (GST) across India. “We have undertaken significant economic reforms to improve the ease of doing business and opening up the economy for investments. Our Government under the leadership of our Prime Minister Modi has opened up defence sector manufacturing to a large extent under the ‘Make in India’ initiative,” Rajnath Singh said.

Rajnath Singh further stressed, “We have recently reduced our corporate tax significantly. For ‘Make in India’ in Defence if there is need for further tax rationalisation, it may be considered suitably.” The minister also said that this bilateral defence cooperation could be mutually beneficial for defence firms of both countries. He said, “Indian MSMEs seek foothold in the global supply chains with support from of French defence and aerospace OEMs. French companies could leverage from advantages in India such as low wages and availability of technical manpower.”

Rajnath Singh was accompanied by a delegation of senior defence and armed forces officials on his three-day official tour. During the visit, he also formally received the first of the 36 Rafale fighter jet in Merignac. He had also visited the Safran manufacturing plant at Villaroche near Paris. Safran manufactures engines for the Rafale aircraft.

Best Palace Hotels in India Worth a Visit
Ela Gandhi Presents A Life for Peace, from Apartheid to Democracy