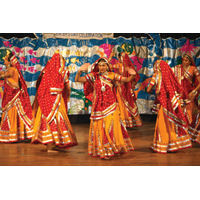 India is a land of varied culture, customs and heritage – where in almost each of the states, one can find a separate cultural identity. No wonder, that for a country so vast and diverse, the number of cultural and religious festivals are also quite numerous. However, certain festivals like Holi, Durga Pujas, Navratri and Diwali, are celebrated by one and all in the land with pomp and fervor. The excitement, anticipation, and zeal that are associated with these festivals are worth mentioning, and people gear up for months before.

In the early days, the focus was more on religious activities related to these occasions, and the customs and practices that were associated with the festival were incorporated into the occasion itself. The fun and frolic of Holi with the spraying of colors, the four-day-long Durga Puja, or the nine-day-long Navaratri celebrations followed by garba, where young and old, rich and poor get in tune in a single harmony. Or the crackling of fireworks, buying of new clothes, and miscellaneous religious activities associated with Diwali – all were celebrated with great passion, but within the limits and confines of the community.

It was probably the influx of media into our daily lives that gradually turned all of these occasions into events. As time passed, these festivals became commercialized; corporations were asked to sponsor various connecting events, and traditional festivals took an altogether different look. Now we have soft drink giants hosting garba dance competitions; multinational electronics goods manufacturers giving awards to the best Durga pujas; and various national and international brands participating in a big way to take occasions like Diwali to a new height. Business worth billions of rupees takes place during these events, and not only in terms of purchases. The sponsors spend big money advertising to draw people’s attention to their products during these times, especially in places where a large number of people assemble – like the Durga puja pandals and garba dance halls. Today, these Indian festivals have gone a long way from household or community affairs to become big-time events.

Recently, this kind of enthusiasm has gradually spread across Indian borders to almost all regions of the world where one can find an Indian community. Be it the posh locales of New York or London, the Middle East, the serene and tranquil shores of Australia or South Africa or even the unknown terrains of Africa or South America – if there is a handful of Indians, be sure these festivals will be celebrated with the same passion as seen in India.

Of all the events, Diwali is probably the biggest one celebrated by expatriate Indians. Much like in India and around the world, wherever the Indian diaspora has set down roots and made their new home, Diwali, the great Indian Festival of Lights celebration, has taken on a more international and regional flair in recent years. One can get the distinct idea that this festival has the same nostalgia and increasing recognition as a major cultural and religious holiday, much like Hanukkah (the Jewish Festival of Light), Kwanza (inspired by African traditions), Eid (the Muslim sacred holiday), and Christmas, a major Christian and global religious holiday. Wherever Hindu NRIs live in sizeable numbers, be it Australia, Hong Kong, Malaysia, Thailand, the Middle East, South Africa, Europe, North America and the Caribbean, Diwali has the same color, feasting, gifting, and sparkle as in India, dominated by the worship of the goddess of wealth, or Lakshmi Puja.

For many years it has been officially celebrated at the House of Commons in London, with a carnival at Trafalgar Square. The biggest festival outside of India is in Leicester with a main street lit with hundreds of thousands of lights. It is also celebrated as a special event in all major cities of North America, an official holiday for Hindus in Kenya and Mauritius, and a national event in Caribbean islands.

At Britain’s biggest Hindu temple, the Swaminarayan temple in London, NRIs come from all over Europe to participate in Diwali and get blessings in the form of food and a calendar. In Melbourne and Sydney, NRIs have many events for Diwali. Everywhere it has some common festivity – a “Diwali Mela” or fair for shopping and gorging on Indian delicacies; a formal dinner party with top entertainment and prizes; a community gathering with firecrackers; and a mass Lakshmi Puja followed by community dinner.

In the United Arab Emirates (UAE), in the morning devotees generally visit a temple in Bur Dubai in the heart of this west Asian metropolis. Houses are decorated with lights and earthen lamps, though fireworks were kept to the minimum because of local rules.

The United States is a place where a sizeable number of expatriate Indians live. Just as in India, Diwali celebrations have undergone a considerable change and transition over the years. From very modest bring-a-dish casual affairs, to gatherings in private homes or classrooms at local colleges, Diwali celebrations have grown to become elaborate and colorful show-and-tells in major hotel ballrooms with delicious sit-down dinners, followed by entertainment by local talent and special guests. Big cities, like New York, have been organizing huge and colorful Diwali melas, outdoor bazaars, and festivities to bring a little of the Indian cultural experiences and spirit to serve their large Indian American populations and others interested to learn about this great and ancient holiday tradition. Today the festival of Diwali has an important part in community cultural calendars, attracts a fair amount of media attention, and many non-Asian Americans attend its annual celebrations.

Such is the growing popularity of Diwali that it has found friends in high places: Diwali celebration at the White House, in city halls, state capitals, and civic and diplomatic functions. Efforts are underway to have a special stamp issued by the U.S. Post Office to recognize Diwali as a major component of the changing and emerging cultural and spiritual landscape of the U.S. In Britain, there is pressure by NRIs to declare it a public holiday.

As the Indian community has grown in various pockets of the world, many unique regional elements, expressions, and traditional inspirations have made Diwali a multi-faceted, multi-textured, and multi-cultural affair. This ties into personal experiences and memories of events back home in India, and initially needed adaptations reflective of the time and place.

Even certain festivals in India, even though they have a national fabric attached to it yet could be associated with a particular community, are gaining tremendous popularity the world over among the immigrant Indians. Durga puja, for instance, is mostly associated with Bengal or Bengalis, as is Navratri and garba with the Gujaratis. Outside of India, these festivals have become synonymous with the entire NRI community.

Durga puja, for instance is celebrated in various parts of the world, where mostly there is a Bengali Association or at least an Indian association. The idol is imported, primarily from Kolkata, months ahead by air or ship, and is placed in community halls. As the fast-paced life abroad does not allow the luxury of four-day celebrations as in India, the Durga puja is generally held on the weekends, when the rituals of the four days are celebrated in just two. All the NRIs in the local city or town throng to these halls for lots of fun. While there is a lot available in terms of food, many such puja organizers bring Indian performers from back home who present cultural programs during those days. Overall, the entire community rises up in enjoyment and celebration. In big cities of the West, like New York, San Francisco, and Los Angeles, London, Dublin, and Johannesburg, more than one such Durga puja is organized that draws not only Indian but a host of local citizens too.

Similarly garba is also a global event now. For global Gujaratis, the entire world is a stage as garba is done from Los Angeles to Leicester and Dar-es-Salaam to Durban. The essence of Vadodara’s garba madness can be felt in Chicago or in New Jersey, which has burst into festivities since Navratri celebrations began. In the past few years, garba/raas has become extremely popular in various parts of the world, more significantly in the United States, with over 50 college teams competing in various competitions annually. There are several reasons why garba has become globally popular, and one is its prominence in Indian films. It started with Salman Khan and Aishwarya playing dandia raas in the film Hum Dil De Chuke Sanam, and the trend continued in other films like Bride and Prejudice, Aa Aab Laut Chale, among others.

In fact, these festivals are also a platform for ever-busy members of the Indian community to mingle with their compatriots in a relaxed environment. Away from the daily hustle and bustle of life, these festivals have become a meeting place for the younger generation, where they get to know their country and the rituals, customs ,and practices. Many parents feel that if their children go to Indian programs, they are going to get exposure to Indian culture and also meet like-minded Indian kids. It is no wonder that the programs and events act as potential matchmaking venues for the expatriate Indians.
Whatever the reasons, Indian festivals are gaining tremendous popularity the world over. With Diwali, Durga pujas, Navratri, garba or Holi, the fervor and passion is just getting stronger. It all demonstrates the simple fact that the popularity of Indian festivals is universal, global and growing in size and stature with the passage of time.