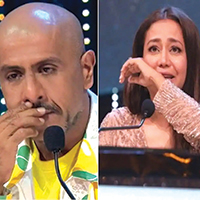 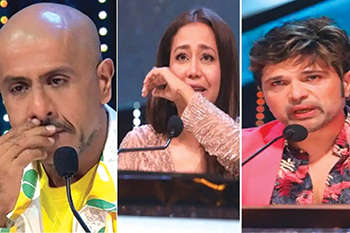 Season 12 of Indian Idol has been full of criticisms from the viewers. It is mainly due to the over-dramatization of the personal incidents of the contestants and the tears of the judges at them. After the Father’s Day episode on 20 June, the netizens burst into severe criticism and said that Indian Idol is becoming more like a daily soap rather than a music show.

On the Father’s Day episode, every contestant came with their fathers. They started narrating stories of their lives and the lyricist Manoj Muntashir gave a monologue before every performance and the judges Himesh Reshammiya, Sonu Kakkar and Anu Malik frequently broke into tears. This irritated the viewers and they started slamming the judges for their over-reaction to different kinds of memes on social media.

Judge Neha Kakkar has been criticized right from the beginning for shedding tears now and then. Viewers also disapproved of the highlighting of the poverty and other difficulties of the contestants more than their singing talent.

Amit Kumar, the famous singer and son of the late legend Kishore Kumar also criticized the show. He came to the show as a guest judge for the Kishore Kumar special episode. He expressed his dissatisfaction over the standard of the singing and said that since he was paid he had to praise the singers according to the channel’s instructions.

Former Indian Idol champion Abhijeet Sawant also criticized the show for losing its focus. He said that the show is more interested in selling the emotional stories of the contestants rather than highlighting their talents.