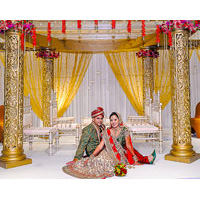 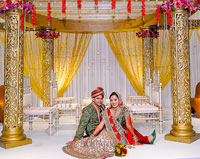 Those not intimately familiar with Indian weddings may envision large, extravagant weddings complete with loads of money, glamour, and style all rolled into one to make one of the most important events in one’s life the most memorable. However, with all the glitz and sparkle in modern day Indian weddings, the celebration is still not devoid of age-old wedding rituals. Such is the strength and solidarity signified by Indian wedding rituals. Indian weddings are solemnized with utmost sanctity, and the married couple is believed to be bound to each other for seven birth cycles. 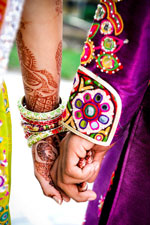 Traditions aside, the tilak when applied at the space between the eyebrows, known as Ajna chakra, has a cooling effect as it tends to nullify the heat that is generated when concentrating, meditating or praying during the ceremony.

This traditional ceremony is held with opulent celebrations and elaborate decorations. The engagement ceremony sanctifies the institution of marriage, and it signifies the bride and groom are joined together for life. It is also one of the first celebrations held between the bride and the groom’s families.

The sagai is also known as the ring ceremony since the bride and groom exchange rings with each other during this ceremony. The ring signifies a never ending circle, thus once the rings are exchanged, the couple becomes one for life. A havan is performed to bless the couple, keep evil and negativity away, and harness cosmic energy so as to achieve spiritual and material goals. 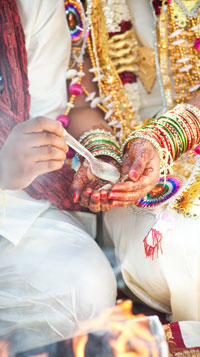 This is a puja ceremony done in order to worship the nine planets of our solar system that govern us. Indian mythology and ancient studies state that these celestial bodies, depending upon certain factors, affect a person’s destiny either positively or negatively. The most intense impact is said to come from the nine planets of our solar system. Thus, at the navgraha puja the Gods associated with their respective planets are asked to shower their blessings on the bridal couple.

Mehndi is considered to be one of the 16 adornments of the bride. In this pre-wedding ceremony, the bride is beautified with the colors of mehndi on her hands, arms, legs, and feet. A mehndi expert is usually invited to artfully design the bride’s mehndi. The mehndi ceremony is a merry and festive occasion, an appropriate precursor to wedding celebrations. Since the ceremony revolves primarily around the bride, it is essentially a event for women.

Mehndi is made by drying the leaves of the henna plant. Henna has a cooling effect on the body – it keeps at bay the heat generated in the body out of anxiety and excitement, thus keeping the bride at ease in the midst of all the overwhelming activities throughout the wedding. Many believe that the darker the color of the mehndi, the longer will she be loved by her husband.

The vidai ceremony typically takes place after the wedding day when the bride officially leaves the house of her parents to live with her husband. In India, this ceremony is filled with much emotion, unlike some of the previously mentioned ceremonies. The bride’s family bids her farewell, and the bride promises to bring prosperity and good luck in her new home. The vidai ceremony implies the end of one phase of bride’s life, and publicly announces the start of a new phase with her husband and new family. This ceremony is a combination of happiness and sadness. Though the bride and her family are sad that she is leaving them, at the same time they are also happy that she is going to start a new life with her new family. 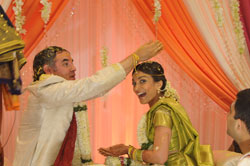 Once the wedding and reception are over, the couple goes to the groom’s house. Before entering her new home, the bride waits at the entrance for the datar ceremony. It starts with the groom’s mother or any elderly person rinsing the bride’s feet. The bride has to sprinkle milk in every corner of the house, while her head is covered. This act has a deep-rooted meaning – it signifies that incase there arises any misunderstandings between the family members, the bride will seek it out and maintain peace. She then takes a fistful of salt and places it on her groom’s hand, he in turn passes the salt back in her hand without spilling any, and this procedure is repeated three times. This way, every member of the groom’s family participates in this ceremony.

The significance is that just as salt blends with any food and adds taste to it, so would the bride blend with the family members and maintain love and harmony.