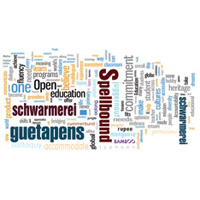 No one is surprised to see a successful Indian walk into a boardroom, no matter which part of the world. Everyone has readily accepted that Indian intellectual capital is among the best in the world. While native intelligence and innate talent must be acknowledged, credit must also be given to the fact that Indians are among the most hard working and diligent found in the world. A combination of providence and prudence together enable Indians to shine.

While it may be much easier to ascribe hard work and dedication to working individuals, what can you say of children in whom the same streak of excellence can be clearly observed? Indian American children have proven their intelligence in several arenas and have shown that they are different in the way that they perform. 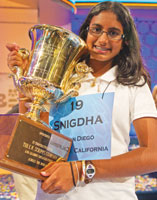 Recently, fourteen-year-old Snigdha Nandipati from San Diego, California, won the 85th Scripps National Spelling Bee. Someone has got to win the competition, and why not her, you may ask? You may also wonder what is so exceptional about this moment. Are overly enthusiastic Indians who want to prove that Indian students shine highlighting this event? In this case, Snigdha was up against Indian American Stuti Mishra from West Melbourne, Florida, for first place. Stuti fell to second place when she misspelled schwarmerie. Snigdha, on the other hand, aced the word guetapens to take home the trophy. To top the moment, Indian American Arvind Mahankali came in third, making the final round of this spelling bee an all Indian moment.

What really gives Indian American children an edge in this competition? When you speak to any of the contestants, you will find that they have been exposed to native Indian languages, usually a regional tongue practiced with family. This exposure helps greatly, enabling them to build on linguistic capabilities. Take for instance, Snigdha, who is conversant in Telugu, which is spoken in the Indian state of Andhra Pradesh. Many such children are enriched with the opportunity of being exposed to such languages that are rich in complexity. This helps them understand many more seemingly difficult words and also make correlations.

Discipline in something most Indians have en grained in their systems. Regardless of where you live in the world, most Indian parents and families stress the importance given to academics and education. Involvement in academics is not confined to the child alone. The entire family is actively involved in most academic activities, whether with training, helping and tutoring at home, or even gaining additional skills needed to succeed in school and life. The process of working as a team and building on the experience with the parents gives the children greater proficiency and much more confidence. The concept of memorizing or learning by rote is not something that every child in America may be familiar with, but it is something that Indians can do rather well. Being taught this skill in their own formative education in India, Indian American parents have been able to impart this skill to their own children. The ability to commit to memory and retain information is significantly higher in Indian Americans as compared to the others, largely due to conditioning.

Indians have always been used to complexity. Whether in the names of family members, cities and towns or even languages and concepts, there are so many tongue twisters. While they may seem rather comical on the surface, being able to deal with them gives children a greater degree of control. What is more, the system of education and leaning in India has still remained primitive in a certain sense. Children are dissuaded from using calculators when doing arithmetic, they still need to rely on their memory greatly and also learn things the conventional way. In several areas, this has helped them immensely. While Indian Americans may not learn this way at school, they are still being taught many of these skills and methods by their parents and grandparents at home.

A combination of factors contributes to the success of Indian Americans in arenas such as the spelling bee. Indians have much potential in matters of intellectual pursuit, but it is also their ability to work hard individually and in groups, be idealistic and visualize, and apply concepts and techniques that has enabled them to gain a strong foothold in a variety of areas.

While the spelling bee and the success enjoyed by Indian Americans is a big milestone, you cannot ignore Indian American children’s achievements in competitions such as Math Counts and science Olympiads.

These spelling bee victories may seem very basic compared to other achievements to be made by the children as they grow. However, they make for excellent foundations and are a clear indicator of the potential these children possess as well as of future successes. As we bask in the glory that these children bring to their family and the Indian tradition, the world sits up and notices yet again the brilliance that India inspires.