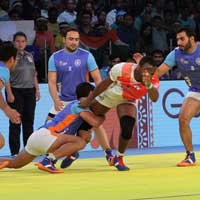 India registers huge win against England in the crucial match to enter the semi finals of the ongoing Kabaddi World Cup, Kenya beats USA in another match.

Indian team dished out a stunning performance to make it into the semi-finals of the 2016 Kabaddi World Cup after registering an emphatic 69-18 victory over England in their last Group A match on Tuesday in Ahmedabad.

India finished the group with 21 points in five matches with one loss and four victories.

The two-time defending champions’ only loss came in the tournament opener when they were stunned by South Korea.

But the host nation came back with a bang and defeated Australia, Bangladesh and Argentina by huge margins.

South Korea is the other team from Group A to have made it to the last four after winning all the league matches which gave them 25 points.