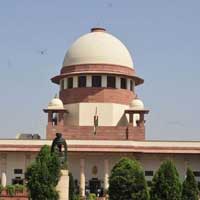 Supreme Court asks Karnataka to release 2000 cusecs of cauvery water per day to Tamilnadu till further orders, also appeals for peace in both states, Karnataka says it has no water to release.

The Supreme Court has retained its direction to Karnataka to release 2000 cusecs of Cauvery water per day to Tamil Nadu till further orders.

Asking the two governments to ensure peace and harmony, the court said that citizens should not become law unto themselves.

The Court also noted the submission of Karnataka that it has complied with the earlier order of releasing 2000 cusecs of water to Tamil Nadu.

Both Karnataka and Tamil Nadu said they were in dire need of water, which was even supported by Attorney General Mukul Rohatgi.

Centre on Tuesday also told the apex court that it supports the demand for review by constitution panel the 2007 award of Cauvery tribunal.

Reacting to the Supreme Court order Karnataka Chief Minister Siddaramaiah said there was no water in the state’s reservoirs. The apex court will continue hearing in the case today as well.