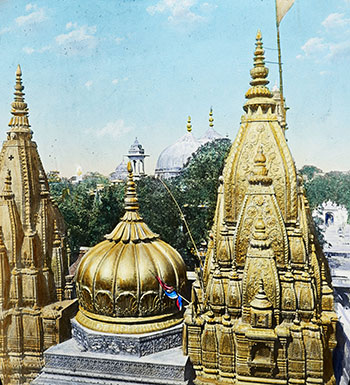 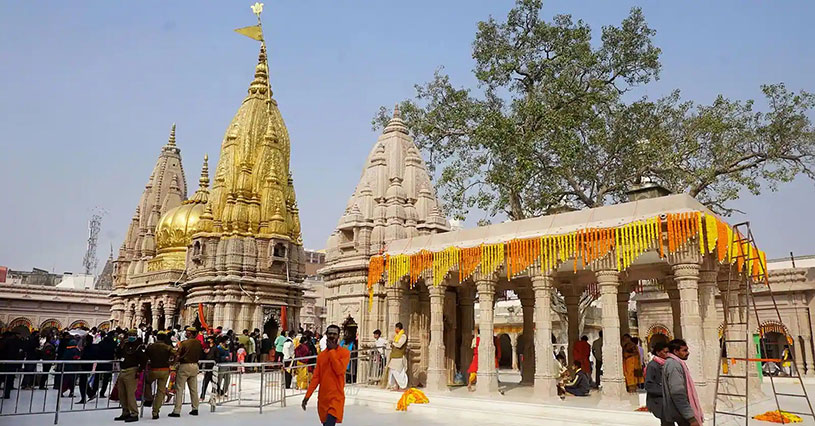 On December 13, 2021. Honorable Prime Minister Narendra Modi ji inaugurated the Kashi Vishwanath Dham Corridor, which has been a landmark development for the temple city of Kashi or Varanasi and the auspicious Vishwanath Temple complex. The newly built Kashi Vishwanath Dham corridor has transformed the 3,000 square foot area of the Vishwanath Temple into a massive 500,000 square foot complex with facilities for pilgrims. Such facilities include the Tourist Assistance Center, Vedic Center, Special Shelter for ailing persons, Bhogshala, City Museum, Viewing Gallery, Food Court, and more. Pilgrims can have a view of the holy river Ganga from the complex, take a dip in the river, and come directly to the temple for prayers. After its splendid makeover, the holy temple can now accommodate 50,000 to 75,000 pilgrims. 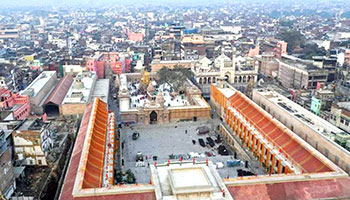 Paying his deepest regard to Lord Vishwanath, the Prime Minister began his speech by chanting “Har Har Mahadev.” Expressing his devout respect for the holy city and its religious and cultural heritage, Modiji said, Kashi is ruled by the one with a “Damru,” or Lord Shiva. It has been attacked by so many invaders through the ages, but no one could destroy its heritage and the significance of Kashi. Citing examples he mentioned, if there was an Aurangzeb to attack, there has been the courageous hero Shivaji to defend him. He stressed the importance of the 3 Cs in today’s perspective, and he urged everyone to follow them. These 3 Cs are the Cleanliness, Creativity, and Creation of a self-reliant India, or Atmanirbhar Bharat.

Emphasizing the religious, cultural, and traditional supremacy of kasha, Modiji successfully upheld the national integration and unity of India, nurtured in the rich land of Kashi. He mentioned that Kashi is the land of the four Jain Tirthankaras, and the embodiment of nonviolence and austerity. “From the integrity of King Harishchandra to the knowledge of Vallabhacharya, Ramanand Ji,” he said, “there are many sages and acharyas rooted in this holy land.” He honored Chaitanya Mahaprabhu, Swami Vivekananda, and Madan Mohan Malaviya. He also paid his tribute to Rani Lakshmi Bai and Chandrashekhar Azad who fought for their motherland from this holy land. He also paid tribute to the creative maestros from here like Jaishankar Prasad, Munshi Premchand, Pandit Ravi Shankar, and Bismillah Khan. 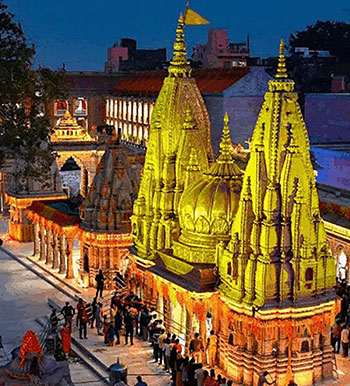 The foundation stone for this project was laid on March 8, 2019, by the Prime Minister himself. Despite the pandemic, the workers continued with the construction work. Modiji profusely thanked the workers for their relentless efforts, and—as a token of gratitude and respect—had lunch with them on the day of the inauguration. He visited the Kal Vairav Mandir, had a bath in the holy Ganga, and offered prayers at the Kashi Vishwanath Temple. In the evening, he viewed the grand Ganga Aarti from a cruise. This was a special Aarti on the occasion of Shiv Deepotsav, where several thousand earthen lamps were lit, followed by fireworks and a special light and sound show.
The sacred city of Kashi, especially the Vishwanath Temple, holds special significance among Hindus as well as all tourists worldwide. More than 7 lakh devotees visit the temple every year. Being one of the 12 Jyotirlingas of Lord Shiva, this temple was founded in 1490. Many rulers have ruled the city, and it has faced many attacks. Even the temple was destroyed. It was last rebuilt and restored by Rani Ahilya Bai Holkar, the Queen of Indore.

The newly inaugurated corridor has been the first step toward enhancing pilgrims’ pleasure and convenience. They will no longer need to cross the narrow lanes and bylanes and innumerable illegal constructions and impediments when coming to offer their prayers to Lord Vishwanath. Instead, they will be able to visit a wider, broader, and even more beautifully built temple complex overlooking the holy Ganga; and pray peacefully. Modiji’s endeavor has liberated Kashi Vishwanath Temple of its dirty and gloomy surroundings and has renovated it to a wonderfully built complex—a point of pride for all Indians.

According to records, the Kashi Vishwanath temple was found in 1490. Kashi has seen the rule of many kings, one both famous and not so famous. It was also ruled by Buddhists for some time. Undoubtedly, the city has seen its share of slaughter and destruction. The temples were plundered time and again by the Mughals.

The Kashi Vishwanath temple was last rebuilt and restored to its glory by the Queen of Indore, Rani Ahilya Bai Holkar. She took the initiative to restore the temple and provided the funds for it. Later, however, Akbar’s great grandson Aurangzeb destroyed the temple and built a mosque in its place.

The temple holds immense significance to Hindus, as it is revered as one of the 12 Jyotirlingas of Lord Shiva. There is a popular belief that Lord Shiva stayed here for some time.

The Kashi Vishwanath Temple has three domes covered in gold! As per the popular belief, any wish is fulfilled if it is made after seeing the golden chatra.

It is said that when news reached of Aurangzeb’s plans to destroy the temple, the idol of Shiva was hidden in a well to protect it from destruction. The well, called the “well of wisdom,” still stands there between the mosque and the temple.

The divine shrine is visited by more than 7 million devotees year after year and has been restored and beautified with the Kashi Vishwanath Dham project by the Prime Minister Narendra Modi-led government. On December 13, 2021, PM Modi inaugurated Phase 1 of the project.

The main deity is known by the name Vishvanatha or Vishveshvara, meaning “Ruler of The Universe.” Varanasi city is also called Kashi. Hence, the temple is popularly called Kashi Vishwanath Temple. 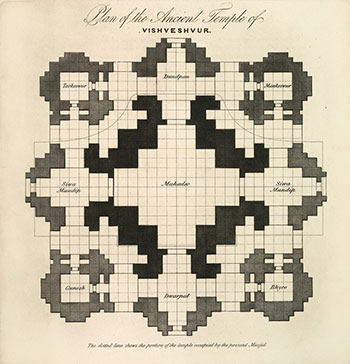 The Kashi Vishwanath Temple Corridor Project was designed at a cost of $105 million, including $51 million compensation to acquire area for the complex.

314 properties were acquired, and 1,400 people were rehabilitated, without a single litigation in court.
Over 27 ancient temples that reappeared during excavation were preserved in the corridor and restored to former glory.

Gateways and structures leading to the temple were built with stones using traditional craftsmanship.
The temple can now be accessed through the river Ganga by steps and escalators via a disability-friendly corridor.
Apart from the Godolia and Saraswati Dwar entries, devotees can also reach via the riverfront using the new jetty for docking boats.

The temple complex will host 27 structures including prayer halls, a museum, rest areas, a guest house, a food court, a security center, and information zones.

The temple corridor will be secured with 300 CCTV cameras and baggage scanners.

temple city of Kashi or Varanasi

one of the 12 Jyotirlingas of Lord Shiva