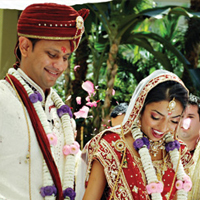 In 2010, Kalpeshree (Kelly) Patel and Jaimeen Brahmabhatt met through an online dating website. Jaimeen was in Chicago and Kelly was in Tampa, but they stay connected through e-mails and phone calls. One day, Kelly took their relationship to the next level by arranging a visit to Chicago to see Jaimeen. They officially became a couple one year after their first date.

In spring 2010, Jaimeen asked Kelly, “If I proposed within the next six months, how long would we remain engaged?” Kelly replied “Not too long, six to eight months, perhaps.” On May 5, 2012, after scheming and planning with Kelly’s parents, brothers and girlfriends, Jaimeen surprised her with an official proposal on the gazebo of the Grand Hyatt overlooking Tatmpa Bay.

They got married March 30, 2013 in the atrium of The Gaylord Palms Resort in Orlando because of its central location and convenience for out-of-town guests. One of the main reasons was that the venue was Kelly’s dream wedding destination. Wedding planning began seven months before the wedding date. Kelly and Jaimeen wanted to be 100 percent involved in the wedding, so they decided not hire a wedding planner or consultant.

Pre-wedding celebrations were held in the Presidential Suite at the Wyndham Grand Orlando Resort, Bonnet Creek, with 40 guests in attendance. The welcome dinner was held at the Hilton Garden Inn in Lake Buena Vista, and the theme of the event was “MelaMasti.” Kaleidoscope Lighting arranged the lighting. Paper star lanterns and different booths for bindis, bangles, mehndi, and caricature artists dotted the venue.

Though the wedding was held indoors, the venue was decorated to bring the outdoors in. The Mandapwas round draped in plum red, magenta, white and pink fabrics. Natural sunlight streamed in through the glass walls of the atrium adding to the ambiance. Pink and white lilies, white roses, plum orchids and eight huge plum carnation balls were used for floral décor.
DJ Firoz of Dudha Productions played music, and Mitul Ghandi played the dhol. Jaimeen entered to the instrumental version of “Azeem O Shan Shahenshah,” and Kelly walked in to “Teri Ore. “Kelly, a self-professed computer nerd, designed the ceremony programs in magenta, pink, white and blue paisley prints describing Hindu wedding rituals. After the wedding and vidai, Jaimeen drove Kelly back to the Wyndham Grand Orlando Resort in a Rolls Royce.

The reception was held at The Wyndham Grand Orlando Resort. Flower arrangements in rectangular mirrored vases and monet glasses filled with orchids, pearls and water topped the X-shaped tables. Since the couple loves to travel, the tables were named using airport codes from places they traveled individually or together. The sweetheart tables were named with words meaning “love” in the different languages of places they visited. Instead of a cake, the couple chose six varieties of Indian sweets.

The couple’s first dance was to “Ajab Si” from Om Shanti Om, the first movie they saw together. The bridal party and friends did an impromptu jig to Harlem Shake, which was one of the funniest and memorable moments of the reception.

The couple advises brides and grooms-to-be to spend as much time together during the planning stage and not to stress too much about the little things.

How to Lose Weight the right way for your Wedding By: Saira Gillani, ND
Pre-Wedding Beauty Care Go Natural