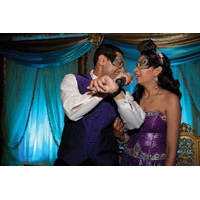 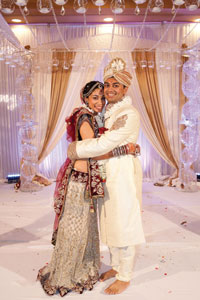 On December 12, 2011, two people tied the knot of holy matrimony. The bride, Reshma Patel looked resplendent in her gorgeous wedding attire and even more so because she glowed with a happy marital bliss. The groom, Jeremy Patel looked proud of his beautiful wife. The wedding, with all the 350 guests assembled at Sheraton Hotel in Hollywood, Florida, was perfect.

It all began in the summer of 2006 when Reshma and Jeremy were classmates in the Managerial Accounting class at the University of Florida. Following their brief acquaintance in college, circumstances brought Reshma and Jeremy together at the Hindu Student Council. Soon, Reshma found out that Jeremy lived in a building that she frequented to meet her friend Kevin. She began seeing Jeremy whenever she came to meet Kevin. Hearts began to grow fonder, and eventually, Jeremy took Reshma out for lunch to Pizza by the Slice. By November of the same year, Reshma and Jeremy went on their first “official” date to Leonardo’s and shared the sinful chocolate cake. After that, the bond of love was sealed forever. Reshma and Jeremy dated for four years before exchanging vows. 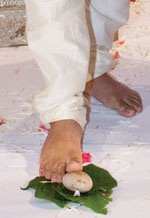 The wedding proposal itself was beautiful. Most of their friends agree that Jeremy has not one, but a body full of romantic bones. On March 25, 2010, Reshma found her bedroom door closed when she came home from work. When she opened the door, she was greeted by a lovely setting. room smelled of gardenia, her favorite scent. Her room was swathed in white sheets, and on the left, were rose petals that spelled “will you marry me.” A stunned Reshma was yet to absorb the transformation of her room when she saw Jeremy, kneeling down with a ring in hand. He told her that she was the most special person in his life, and he could think of no one but her to spend his life with. He asked Reshma to marry him and of course, the lucky girl said “yes.”

Once the would-be bride said “yes” to her soul mate, arrangements for the wedding were put in motion. Luckily for the couple, their respective mothers turned out to be great wedding planners. Reshma’s mother Vina and Jeremy’s mother Nayna threw themselves into their children’s wedding arrangements immediately. The couple waited a year and eight months after their engagement for the wedding to happen. The Sheraton Hotel in Hollywood was the venue of choice partly for the convenience for both sides and partly because of its grandeur.

The arrival of the groom is always a much awaited event at any wedding. On his wedding day, Jeremy lived up to the hype by arriving in a gleaming black Rolls Royce Phantom, accompanied by his sister, Devanshi. To seal this beautiful bond between Reshma and Jeremy, an equally enchanting mandap was set up in the Sheraton’s ballroom. At 9 o’clock in the morning, when the wedding ceremony began, the ballroom looked like a dream with soft lighting and many candles. The mandap was displayed traditionally with handing candles and stood two feet above the ground. Red flowers adorned the white aisle and completed the dream-like ambiance.

The wedding reception was no less grand. Dazzling teal accent lights adorned the room, teal satin tablecloths and chair bows created the setting, and the ceiling was draped in white drapes. One center piece was modeled like a ball with clear tall flutes and white flowers. The second center piece was made up of white flowers set on a short base. The bride and groom looked stunning in matching purple outfits. A stage was set up for them in the middle of the hall. As the couple walked in, twin petal blasters showered them with pink petals.

Music at the reception was an eclectic mix of Indian and western being turned out by a DJ. Original songs were played that won approval from everybody. The reception began with a short introduction, and then the couple cut their reception cake before going to the dance floor where they swayed to “A Whole New World” from Aladdin.

The bride then danced with her father to the tune “Baba ki Rani.” Friends from college took over, and it was time for some fun games. The bride won the task of rolling out roti dough that was judged by both the mums. The groom seemed to be more price savvy as he won the next task of having to guess the price of articles. The groom also seemed to be more fashion savvy as he won the game where the he had to dress a boy in a girl’s dress, and the bride had to dress a girl in boy’s attire. However, the bride was wittier as she won the game where they had to come with the best responses to different questions. After the games, the bride’s sister performed a dance, the groom’s sister lifted a toast and finally, the groom became enthusiastic and gave a charming thank you speech.

As for people whose weddings are coming up, Reshma and Jeremy suggest that they do not get too stressed while planning. Instead, prioritize your plans and execute them accordingly. Couples should enjoy the whole journey.

Though the wedding was finally over, a lifetime of celebrations for the couple had just begun.