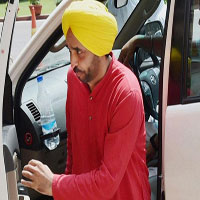 As soon as the House met for the day, Sumitra Mahajan announced this saying the committee headed by BJP MP Kirit Somaya will submit its report by 3rd of next month.

She also asked Bhagwant Mann not to attend the House proceedings till a decision on the matter is reached.

Last week, the MP had recorded a video of Parliament complex and uploaded it on the social media. The issue had created uproar in both Houses on Friday.