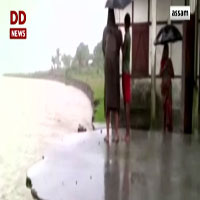 The flood situation has worsened in Assam and Arunachal Pradesh as new areas have been inundated in the two states.

Several rivers including the Brahmaputra are flowing above the danger mark in Assam, where deluge has affected nearly 3 lakh people in about 500 villages spread over 9 districts.

More than 84 thousand people have been affected in Bongaigaon district alone. NDRF, SDRF and Fire and Emergency Services personnel have been deployed in rescue operations.

In Uttrakhand, Kali River in Dharchula, was flowing near danger mark due to continuous and heavy rain. As rains continue to lash Uttarakhand, 11 people have been killed across the State in road accidents and landslides in past two days. Meteorological Department has issued heavy to very heavy rainfall alert on Sunday for the next 72 hours in many regions of Uttrakhand.