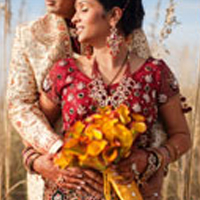 Magic in the Air

A proposal made in the air, and a wedding solemnized on earth,
… this jodi was made in heaven 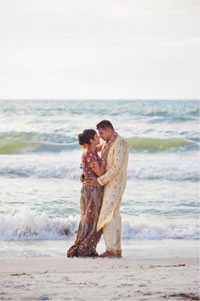 Poornima flew from Philadelphia to Tampa, where she and Anand Tyagi lived planned to spend a quality weekend together. Poornima’s sleep during the flight was interrupted by an announcement. It was about a surprise gift Poornima Gaur had won, and she was requested to collect it from the front row. Reaching the front, she was congratulated by the staff for winning the special prize. In a flash, Anand appeared from behind the curtains of the beverage cabin, got down on his knee and proposed to her. Taken aback by such a welcoming surprise, all Poornima could say was yes.

The pilot announced their proposal and everyone on board joined in congratulating the couple. Celebrations started mid-air, with a bottle of champagne and drinks.

Although Poornima lived in Philadelphia, she chose the Palmetto Club near Tampa, Florida, as the venue. The venue’s mesmerizing outdoors was the perfect backdrop for the ceremony. The grand reception hall offered a comfortable accommodation for the guests to celebrate the event.

Mehndi and Sangeet
A Moroccan theme with vibrant purples, oranges, and pinks created a warm atmosphere for mehndi night. The centerpieces were colorful Moroccan lamps, and purple lighting shone throughout the room. The décor incorporated serpentine benches with orange, purple, and pink cushions, which were separated by a table with orange Moroccan umbrellas.

In the center of the room, there was a square boutique tent with purple curtains. A decorative hookah and Moroccan teacups all around generated a true theme ambience. The love seat placed for the couple stood under an orange canopy surrounded by pink Devdas curtains.

Poornima wore a Rajasthani outfit with silver detailing and colors similar to the evening’s theme. Her silver jewelry included pink stones to match her outfit.

Wedding Ceremony
The couple picked a yellow, orange, and red palette as the color theme for the ceremony. An outdoor garden event, the mandap was fabricated with white and gold pillars draped in burnt orange. The roof of the mandap was adorned in gold draping.

There were six Deepalaxmis on white pedestals along the aisle, holding beautiful bouquets. The pedestals were connected with burnt orange drapings, which fell to the grass and were aligned with yellow, red, and orange flowers.

Two white elephant statues stood guard at the mandap gate. The entrance was marked with a Ganesha idol standing on a table beautifully decorated with yellow, red, and orange lotuses.
For the wedding ceremony, the bride went for a traditional look. She wore a burgundy outfit with heavy embroidery. Matching jewelry added much opulence to her elegant look. Her hair was set in an up do and was accentuated with a flower matching her outfit. Her makeup was dramatic, in true Bollywood style. 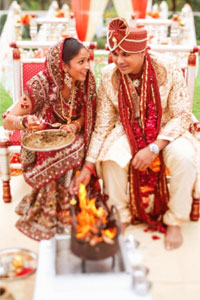 Poornima’s favorite color teal was the theme for the wedding reception. Adding a blend of purple to the theme color created an amazing ambiance for the evening. The bride’s lehnga was teal with of gold embroidery work. Her jewelry in gold withteal stones was a unique piece, and the earrings and tika were crafted in a butterfly design.

The setup for the reception space included two cross formations using long tables and seating. Around the cross formations were round tables. On the cross-section stood a huge 32” cylinder vase filled with clear gels, topped with a spray of six feet tall curly willows, bed of plum hydrangeas, lavender roses, blue and purple dendrobium orchids. Willows were adorned with hanging crystals. The vases were accented with floating candles. The entire arrangement was elevated on acrylic cube to create a more dramatic effect

. The centerpieces on the long tables of the cross set-up were 28” pilsner vases topped with a spray of blue and purple dendrobium orchids and long spurts of curly willow.

The stage for the couple had two golden wrought iron trees as the backdrop. The trees were decorated with floral arrangements. Hanging candles and crystals were also used to bejewel the trees. The stage had a golden royal love seat with a white pleated backdrop.

Throughout the evening, DJ PRAM from Rang Entertainment played a mix of American and Bollywood numbers to keep guests dancing.

Magic in the Air