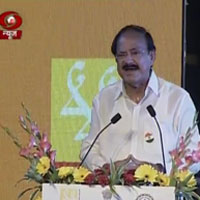 Union Urban Development and Information and Broadcasting Minister, M Venkaiah Naidu on Tuesday paid floral tribute to freedom fighters who sacrificed their lives for country’s freedom during an event in August Kranti Maidan in Mumbai.

People participated on a large scale for the event. This is the park from where Mahatma Gandhi had launched Quit India movement in 1942.

“This is the same ground from where Mahatma Gandhi gave the clarion call of ‘Do or Die’ for independence,” Fadnavis said.

In his three hour-long address at the Maidan in 1942, Gandhiji exhorted countrymen to prepare for the ‘final battle’ for India’s freedom, Fadnavis said.

Various initiatives were organised in Mumbai to mark the Quit India movement which has been one of the major milestones in the history of India’s struggle for independence.

The movement of disobedience launched in August 1942, with Mahatma Gandhi’s call for immediate independence, made at Mumbai’s Gowalia Tank, which is now well known as August Kranti Maidan.

On the 75th anniversary of the Quit India Movement, Maharashtra Government launched the Quit India 2-from Swaraaj to Suraaj initiative at the historic ground.

The new initiative stresses on freedom from illiteracy, farmer suicide, wastage of water, addiction among youth and corruption.

The government commemorated the leaders who fought for our freedom. Participants also took a pledge for holistic development of the nation.