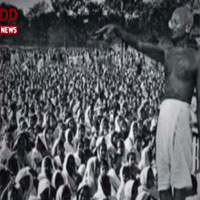 75th anniversary of the quit India movement is being observed on Monday. On 8th August, 1942, “Quit India Movement” was launched by Mahatma Gandhi for Satyagraha, during World War II.

Mahatma Gandhi made a call to Do or Die in his Quit India speech delivered in Mumbai at the Gowalia Tank Maidan.

Prime Minster Narendra Modi will be visiting the birthplace of Chandrashekhar Azad in the Alirajpur district of Madhya Pradesh on Tuesday to pay respects to the legendary and revolutionary leader.