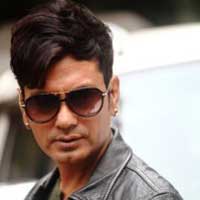 Known for his powerhouse performances, Nawazuddin Siddiqui, is all set to turn a new leaf as the makers of Munna Michael introduce him in a never-seen-before avatar. Redefining cool and bringing on the swagger, Nawaz, equipped with a new hairdo, pierced ears, sunglasses and a leather jacket recently shot for a highlight song, which opens the film.

Talking about what drew him to Munna Michael says Nawazuddin, “I’m tired of the intensity. Bus ho gaya maar-dhaad aur khoon. There’s a lot of romance, apart from the dancing, in this film. Sabbir makes commercial films but he’s focused on detailing, doesn’t overdo things on the set and wants the film to look realistic. I like it when directors don’t play to the galleries”.

The actor will shoot for Munna Michael for 65 days over 2 schedules. He essays a quirky character in the film, one with many shades ,promising to exploit his versatility as an actor.

Manoj Bajpayee: My character in ‘Love Sonia’ is one of the deadliest characters I have played so far
A musical tribute to late Ghazal maestro Jagjit Singh