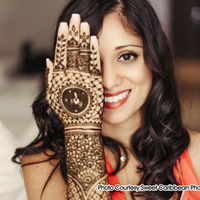 Mehndi is an art of applying decorative designs on hands, feet, and arms. It is an integral part of Indian traditional weddings so much that the ritual has a dedicated day to its name that is celebrated in its full entirety. Festive music, vibrant dance, lavish decor, and mouth-watering delicacies with great pomp have everyone thoroughly enjoying this beautification ritual. Ladies are usually adorned with mehndi (also known as henna) on many festivities and occasions such as Karva Chauth. The dark amber color of mehndi holds a special significance in both Indian and Muslim traditions and is considered auspicious when the color darkens or retains its hue for a longer time. 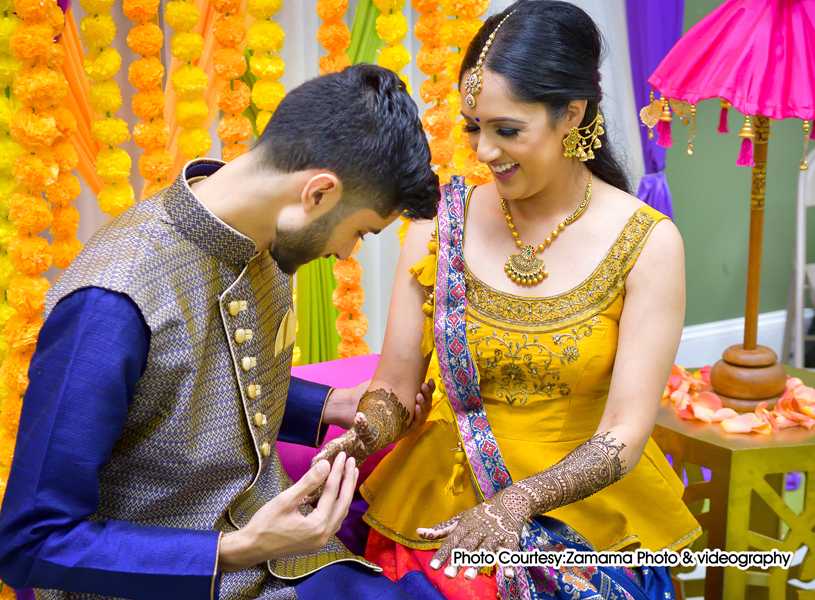 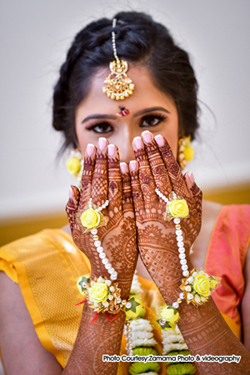 Mehndi is famed for its medicinal properties and use in body art around the world. The word originates from the Sanskrit word mendhika referring to the plant from which it is derived. References suggest that mehndi had its presence in varied cultures apart from India such as Egypt, Asia Minor, Middle East, and was even used by Cleopatra, pharaohs, and Prophet Muhammad. However, the body of art of mehndi had its roots in ancient India from where it spread to different nooks and corners of the world. Discovery of the henna plant’s cooling properties led to the popularity of use on the skin. The plant has even been used to color wool, silk, animal skin, human hair, and more.

Lawsonia inermis, the botanical name of the mehndi plant, is generally found in tropical climates on the Indian subcontinent. Fresh henna leaves, as opposed to powdered henna, have no odor. The leaves of the plant are used to produce a paste that leaves a dark reddish-orange color after application.

The dried leaves of henna are crushed to produce a powder that is then mixed with water, eucalyptus oil, and lemon juice to create a smooth pastelike texture. The paste is left to rest overnight and then poured into a plastic cone for application. 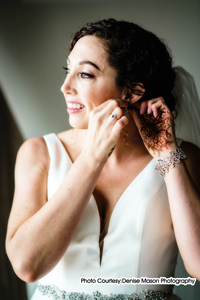 The tip of the cones are cut according to the desired thickness of the line. Cones are then squeezed lightly to apply uninterrupted designs, all ranging from simple to ornate depending on the individual’s taste or the occasion.

When having mehndi applied, it is best to wear short sleeves to keep the hands and arms exposed. From stunning, intricate designs to checkered and geometric patterns, the design options are endless. For minimalists, Arabic designs are elegant. Having mantras etched is the latest fad. Wedding motifs such as elephants and palanquin are the all-time traditional favorites. The feet are not to be forgotten – mehndi done in a prominent motif in the center is quite popular.

Once applied, the mehndi is left to dry for color blending and uniformity. To enhance the color outcome, a mixture of lemon juice and sugar is applied to the Mehndi. Once dry, the mendhi naturally crumbles and falls off. Using water to remove the mehndi is not common practice as this can make the color lighter. 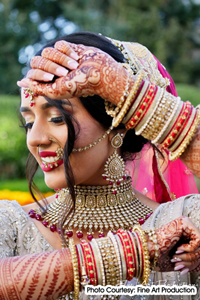 Mehndi as a Ritual

In South Asian weddings, the mehndi event is a ritual where henna is applied on the bride’s hands and feet in anticipation of the wedding ceremony. Not only limited to the bride, all the bridesmaids and guests have beautiful designs done on their hands and arms from hired professionals. The ritual involves the ceremonial singing of traditional songs to the beat of drums and dholaks. Mehndi designs for the bride are elaborate, intricate, and as part of the tradition, it often includes the name of husband-to-be for him to seek on the wedding night.

For some, weddings are a time for doubt and stress. Anxiety and nervousness might be overwhelming, but given mehndi is scientifically proven to be a cooling property, the art of applying henna is a way to calm the bride’s nerves. 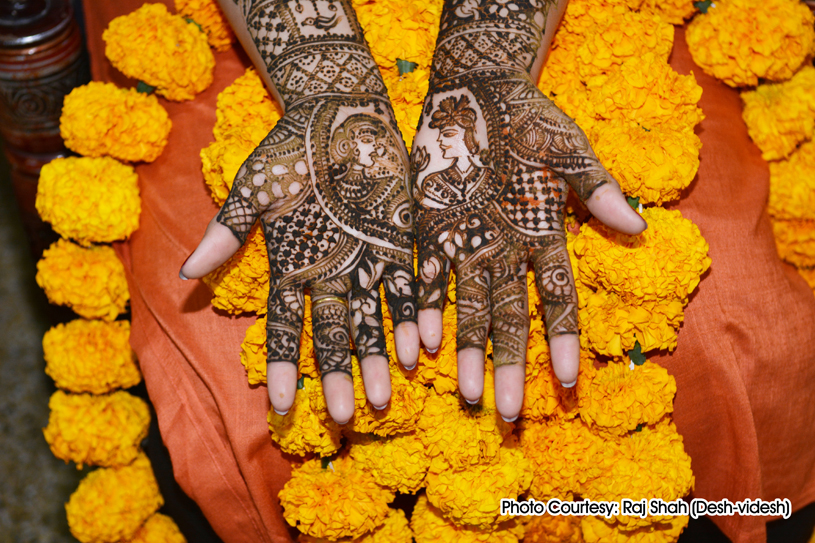 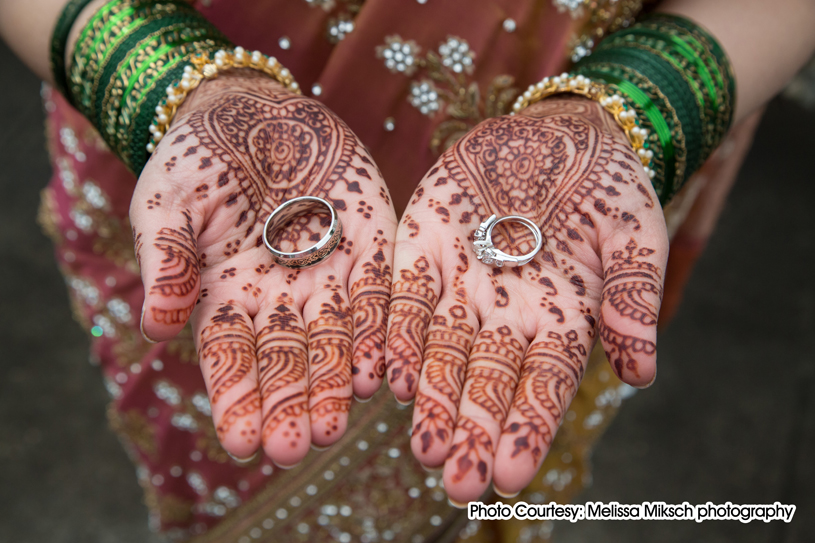 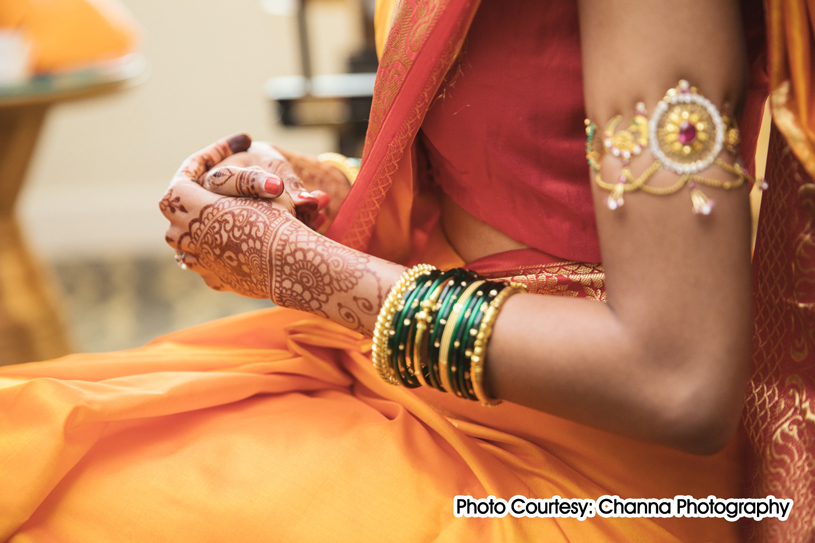 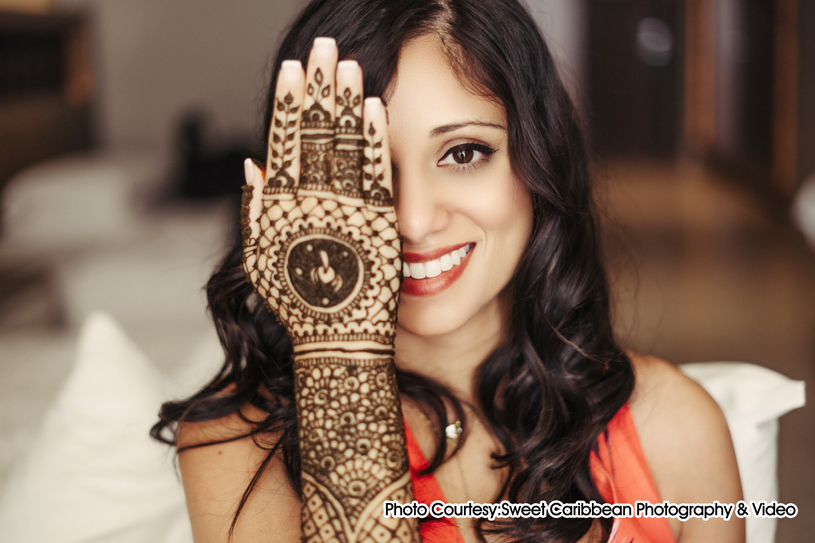 mixture of lemon juice and sugar

Punam and Atit
Karishma and Preston