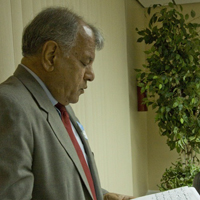 Mohammad Shakirwas born in Pakistan and has been a professional, peace activist, and active volunteer in South Florida for the past 47 years. Presently, he is the Executive Director of the Asian American Advisory Board in Miami Dade, founder of the NUR Center for Asian women and children in distress, and co-founder of the women’s support organization SAHARA. Previously, he worked with Barry University for ten years and ABC’s theater division for nine years, and from 1987 to 2004, he hosted a television segment on Community Service Television Cable called Asian-American Focus.

Mohammad holds degrees in social studies and business, and came to the U.S. from Pakistan in 1970 to further pursue education and financial empowerment. He is a veteran of the U.S. Army, drafted in 1973 for a two year tour just one month after his marriage. He is an alumni of the U.S. Army War College, and as a member of the U.S. State Department sponsored delegation, visited Egypt in 2009 to study religion in public life. A life -long peace activist, he was American Jewish Committee’s nominee for Project Interchange, and visited Israel in 2002 as their peace delegate.

He has served on the boards and grant panels of various organizations, including the Urban League of Greater Miami, the Universal Heritage Institute, and the Miami Council of International Visitors, which is a civilian arm of the U.S. Department of State responsible for promoting citizen diplomacy. He has been an active participant in NCCJ’s interfaith outreach program, and is also a recipient of the 2002 honor award for his volunteer work for the Florida Immigration Advocacy Center. He receivedprestigious national recognition by the FBI and was given the Director’s Community Leadership Award.

Mohammad reminds himself that Americans are blessed to live on a peaceful island free from turmoil, war, hunger, and riots. It is this blessing that motivates him to do community service and “pay his rent” for living in such a free world. Mohammad believes in capitalizing on the good in everyone to work towards a common good, as well as learning something, however small, from everyone you encounter.He is proud of his peace work and his efforts to empower the Asian American community, and is grateful for the support of his family, teachers, mentors and friends. Mohammad is married to Dr. ShahidaShakir, and is blessed with two daughters and five granddaughters.