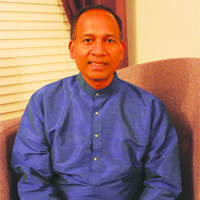 Vijay Persad has been the Chairman of the Board and President of the Shiva Mandir for several years, where he and his family have been active leaders and volunteers since 1991. As an immigrant from Trinidad, Vijay has worked closely with the Caribbean Hindu community and is motivated by the dedication of the Shiva Mandir members to improve his own performance and leadership.

Vijay came to the U.S. in 1975 to study accounting at the University of Texas and work with Albertsons, where he held many different positions while completing school. Prior to this, he completed his high school education in Trinidad, but desired to come to the U.S. for a better life. After achieving his BBA and marrying his wife, Sati, in Trinidad, he returned to the U.S. and continued his management career with Albertsons. When he and his family joined the Shiva Mandir, he was quickly elected to the Board of Directors as Treasurer. His involvement was driven by his family’s support, including his children Shalini, Avinash, and Shivanand. Working with the mandir keeps him focused on the importance of giving back to the community and striving to achieve higher goals. He is proud of the temple community for striving to live a good lives on a daily basis and is inspired by their hard work. 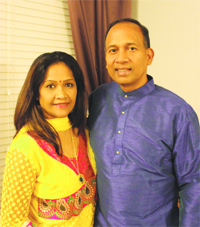 Vijay and Sati, who have been married for 35 years, are blessed with two young grandsons, Niranjan and Vinayak, and continue to volunteer with community projects. Sati is also an active member of the Hindu community alongside her husband, whom she has always supported and influenced in his professional work and volunteer work. She and Vijay are pleased to see that Hindu culture is much more accepted and understood in the U.S., because it not only makes their work easier, but also makes life easier for Hindu children to socialize and excel. Vijay defines success as helping our children accomplish their educational goals and marry within our Hindu religion so they can bring up their children in our rich way of life. He advises immigrants to the U.S., like himself, to stay focused on education, religion, and always work with dedication.