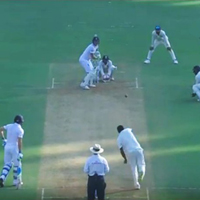 Murali Vijay and Cheteswar Pujara led India’s strong response after Jos Buttler’s 76 pushed England’s first innings total to 400 on the second day of the fourth Test at the Wankhede Stadium in Mumbai.

The Indian duo added an unbeaten 107 for the second wicket as India ended the day’s play at a comfortable 146 for 1, trailing England’s total by 254. Ashwin’s dream run in 2016 continues as the off-spinner bagged his 23rd five-wicket haul.

Murali Vijay and Cheteshwar Pujara made the Wankhede surface on Day 2 in Mumbai look like a pleasant dream..Vijay’s unbeaten 70 contained six fours and two big sixes, a statement of intent to prove that the pitch was not the problem. Pujara, at the other end, seemed in even better touch.

Pujara played a series of delectable punch-drives through covers. By the end of the day, he had hit four such shots, each better than the previous.

Vijay survived a short-ball test early in his innings besides watching his opening partner KL Rahul being bowled by a beautiful delivery from Moeen Ali.

India did not lose a single wicket in the last session of the day, finishing on 146 for 1, trailing England by another 254 runs. England tried seven bowlers, including four seamers, but apart from Moeen Ali nobody could scalp a wicket.

He blasted 6 boundaries and a six. In addition, his 54-run partnership with Jake Ball for the 9th wicket turned back the tide towards his team.