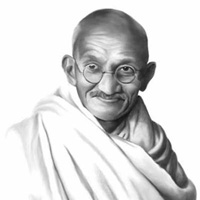 My Life is My Message 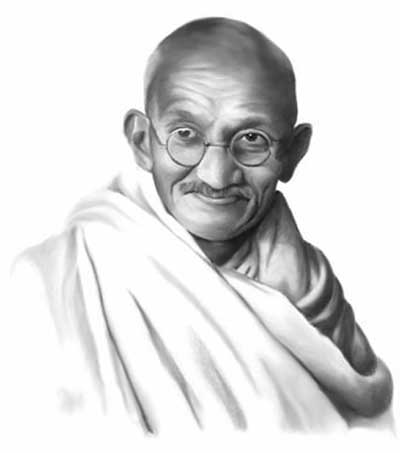 Once a British reporter asked Gandhiji, while the train was pulling out of the railway station, “Do you have a message I can take back to my people?” It just happened that it was a day of silence for Gandhiji. In spite of his heavy speaking schedule, he was very religious about a day of silence. He wrote a few words on a scrap of paper and gave it to the reporter. The scrap paper read “My life is my message.”

Most of you know that October 2, 2010 will be Mahatma Gandhi’s 141st birth anniversary and we could not find a better time to introduce our new column – “My Life is My Message- the Legacy of Gandhiji.”

In this column, we will inform readers of some of the lesser known facts about and articles about Gandhiji. We invite our readers to contribute any articles they may have read about Gandhiji that describe him as a spiritual leader, a Mahatma, as a caring human being, or all of the above.

In the inaugural column, we present readers with an excerpt of an article published by University of Utah Professor Rasoul B. Sorkhabi. 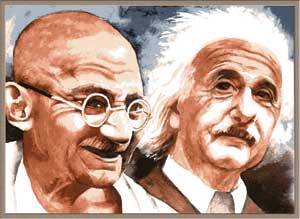 Albert Einstein and Mahatma Gandhi never met each other although they desired to do so. Einstein’s first recorded admiration for Gandhi is as early as July 1929 in an interview with the Christian Century.

The only Einstein–Gandhi correspondence, which we know of, took place in 1931. This letter was sent to Gandhi through Sundaram, an acquaintance of Gandhi, who had visited Berlin, where Einstein was then living. At that time, Gandhi was visiting London to attend the Roundtable Conference on Indian Constitutional Reform. 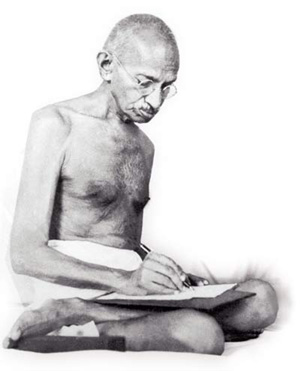 On 27 September 1931, Einstein wrote him:
You have shown by all you have done that we can achieve the ideal even without resorting to violence. We can conquer those votaries of violence by the non-violent method. Your example will inspire and keep humanity to put an end to a conflict based on violence with international help and cooperation guaranteeing peace of the world. With this expression of my devotion and admiration I hope to be able to meet you face to face.

On 10 October 1931, Gandhi replied from London:
I was delighted to have your beautiful letter sent through Sundaram. It is a great consolation for me that the work I am doing finds favor in your sight. I do indeed wish that we could meet face to face and that too in India at my Ashram.

In 1939, Einstein received a letter (dated 12 January) from S. Radhakrishnan, then a professor of Eastern religions at Oxford and one of Gandhi’s followers, requesting him to contribute to a volume of articles planned to be published on Gandhi’s 70th birthday; Einstein gladly accepted and contributed the following to the Birthday Volume Gandhi (1939): 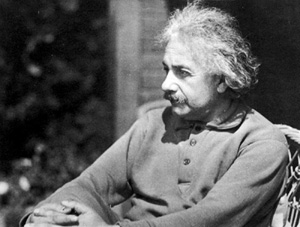 Mahatma Gandhi’s life’s work is unique in political history. He has devised a quite new and humane method for fostering the struggle for liberation of his suppressed people and has implemented it with greatest energy and devotion. The normal influence which it has exerted on the consciously thinking people of the entire civilized world might be far more lasting than may appear in our time of overestimation of brutal methods of force. For only the work of such statesmen is lasting who by example and educational action awaken and establish the moral forces of their people.

We may all be happy and grateful that fate has given us such a shining contemporary, an example for coming generations.

For the same occasion, Einstein also made a statement about Gandhi, which was first published in his anthology, Out of My Later Years.

A leader of his people, unsupported by any outward authority: a politician whose success rests not upon craft nor the mastery of technical devices, but simply on the convincing power of his personality; a victorious fighter who has always scorned the use of force; a man of wisdom and humility, armed with resolve and inflexible consistency, who has devoted all his strength to the uplifting of his people and the betterment of their lot; a man who has confronted the brutality of Europe with the dignity of the simple human beings, and thus at all times risen superior.
Generations to come, it may be, will scarce believe that such a one as this ever in flesh and blood walked upon this earth.

This last sentence was used as the epigraph at Richard Attenborough’s 1982 film Gandhi.
Gandhi was assassinated on 30 January 1948. Three weeks later, a memorial service was held for Gandhi in Washington, D.C., and Einstein wrote the following eulogy:
Everyone concerned with a better future for humankind must be deeply moved by the tragic death of Gandhi. He died a victim of his own principle, the principle of nonviolence. He died because, in a time of disorder and general unrest in his country, he refused any personal armed protection. It was his unshakable belief that the use of force is an evil in itself, to be shunned by those who strive for absolute justice. To this faith he devoted his whole life, and with this faith in his heart and mind he led a great nation to its liberation. He demonstrated that the allegiance of men can be won, not merely by the cunning game of political fraud and trickery, but through the living example of a morally exalted way of life.
The veneration in which Gandhi has been held throughout the world rests on the recognition, for the most part unconscious, that in our age of moral decay he was the only statesman who represented that higher concept of human relations in the political sphere to which we must aspire with all our powers. We must learn the difficult lesson that the future of mankind will only be tolerable when our course, in world affairs as in all other matters, is based upon justice and law rather than the threat of naked power, as has been true so far.

Toward the end of the same year, on 2 November 1948, Einstein sent a message to the Indian Peace Conference, with these closing words: ‘Let us do whatever is within our power so that all the peoples of the world may accept Gandhi’s gospel as their basic policy before it is too late.’
After Gandhi’s assassination, an artist from Calcutta and a physics professor from Ambala sent letters to Einstein criticizing the late Gandhi for his negative attitude toward science and industrialization, and showing their dismay as to how Einstein could respect such an irrational person.
In reply to the Calcutta-based artist, Einstein wrote:
‘There may be some truth in your criticism of Gandhi’s attitude towards technology. I think, however, that his merits with respect to the liberation of India and the principle of nonviolence are so unique that it seems not justified to search for such a small weakness in such as great personality.’
And writing to the physics professsor, Einstein responded:
‘Gandhi’s autobiography is one of the greatest testimonies of true human greatness . . . Do you believe it justified to murder anyone who has some opinion different from yours?’

Einstein’s admiration of Gandhi lasted to the end of his life. He had a portrait of Gandhi in his house in Princeton, which still exists.
Einstein praised Gandhi on numerous occasions. On 18 July 1950, during a broadcast by the United Nations under the title, ‘The pursuit of peace,’ Einstein said:
I believe that Gandhi held the most enlightened views of all the political men in our time. We should strive to do things in his spirit; not to use violence in fighting for our cause and to refrain from taking part in anything we believe is evil.

And in 1952, in a letter to the Asian Congress for World Federation, held in Hiroshima on 3–6 November, Einstein wrote:
Gandhi, the greatest political genius of our time, indicated the path to be taken. He gave proof of what sacrifice man is capable of once he has discovered the right path. His work in India’s liberation is living testimony to the fact that man’s will, sustained by an indomitable conviction, is more powerful than material forces that seem insurmountable.
Gandhi, born in 1869, was ten years older than Einstein. Indeed, they had entirely different backgrounds, education and career paths. One from the world of the Western science, and the other rooted in the cultural soil of India. However, as this essay shows, the common bond of the human heart, compassion and care for peaceful life in the world united them.
Rasoul Sorkhabi is at the University of Utah’s Energy and Geoscience Institute, Salt Lake City.

‘There may be some truth in criticism of Gandhi’s attitude towards technology. I think, however, that his merits with respect to the liberation of India and the principle of nonviolence are so unique that it seems not justified to search for such a small weakness in such as great personality.’

Enlighten This Diwali
A Vegetarian – way of life in The US