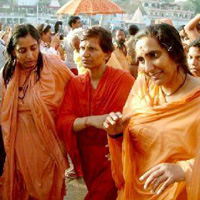 Her speeches are soul stirring and so eloquent that many men and women in the audience weep openly and make no attempts to hide their tears.

I accompanied Didi Maa to Florida, New York, New Jersey, the United Kingdom and Belgium. Our itinerary included several lectures at varied venues, visits to private homes and celebrating important Hindu festivals of Rakshabandhan in New York and Janmashtami in London. Due to the nature of the tour, we went through a myriad of experiences, meeting so many new people and running into old and familiar folks.

It is a fresh November morning in Vrindavan and over two thou sand people have assembled at Vatsalya Gram to participate in the Inauguration Day festivities. It is an astonishingly large gathering for a beautiful Sunday morning and the crowd is energized with anticipation and adulation for Didi Maa Sadhvi Ritambhara. Didi Maa – as she is affectionately called, is perhaps the greatest stalwart Saint of present-day India after Swami Vivekananda. And this is a special day for Didi Maa too as the first phase of her beloved Vatsalya Gram is complete and it will be inaugurated in the presence of an august gathering of some of the greatest Saints and dignitaries of India. As she enters the hall, she walks with confidence and with quick strides reaches the stage. And without much ado she gets down to conduct the ceremonies for the day.

This is reminiscent of scenes that I witnessed on numerous occasions as I spent six weeks with Didi Maa last summer. I have been fascinated by the ease with which she mesmerizes the audience as she speaks like a divine mother whether it is giving details of her Vatsalya Gram or about national pride or about the scriptures. There are times when I have perceived her as an incarnation of Shakti or a modern day Bharat Mata extolling her offspring to unite and come to the defense of their motherland. Her speeches are soul stirring and so eloquent that many men and women in the audience weep openly and make no attempts to hide their tears.

The days I spent with Didi Maa will go down as the most memorable days of my life. Being a second generation Indian born and brought up in Kenya and Uganda, the idea of organizing an international tour for India’s “modern day Vivekananda” was not only a daring proposition that brought with it an avalanche of logistical and organizational challenges yet, when the idea did come to fruition, it yielded unfathomable amounts of joy & satisfaction. There are not enough words to describe the feeling of contentment I have experienced.

The tour commenced with a seven-day Bhagwad Katha at Shree Lakshmi Narayan Temple in Toronto. As the newly appointed International Coordinator for Vatsalya Gram, this was my first experience at organizing a Bhagwad Katha in a foreign country and to coordinate Didi Maa’s tour of Canada, the USA, UK and Europe. It was also my first opportunity to work at such close quarters with Didi Maa. The seven days in Canada and the month that followed were full of life altering experiences, which many would applaud, explore or envy.

From Canada, I accompanied Didi Maa to Florida, New York, New Jersey, the United Kingdom and Belgium. Our itinerary included several lectures at varied venues, visits to private homes and celebrating important Hindu festivals of Rakshabandhan in New York and Janmashtami in London. Due to the nature of the tour, we went through a myriad of experiences, meeting so many new people and running into old and familiar folks. Being the coordinator of the tour, my first and foremost concern was to make sure that the logistics associated with Didi Maa’s schedule were in place and proper decorum was observed during her events. The logistical aspects included travel by air, arranging airport pick up/drop off, accommodation, rides to event venues, etc. Personally, the biggest challenge was to stick to the all mighty concept called Time!

Although I had met Didi Maa before and she had stayed at our home on previous trips, and I had visited Vatsalya Gram, this was the first time that I would be in her company for such an extended period and interact with her on a daily basis. Without a doubt, one of the first things I noticed about Didi Maa is her simplicity and her straightforwardness. I cannot help marvel at the candid distinctiveness she possesses at all times. I am fascinated by the fact that Didi Maa never gave me any instructions. Her life itself is a lesson for those who serve her and work with her. She is an excellent teacher and a loving guide who imparts her lessons not by words but through example of her own conduct. Right from the moment her day begins; she follows a disciplined schedule for herself. She is devoutly spiritual and observes a strict code of conduct based on Dharma. However, she makes no demands or attempts to enforce her views or beliefs on others. She never asks for special favors nor does she ever request exclusive treatment. While collecting luggage from the carousels at various airports, she would not wait for me or someone else to lift the bags. She would lift her bags and help me with mine too! I must confess that I felt extremely secure in her company as she would check out the flight details on the overhead screens and guide me to the appropriate departure gates! Didi Maa seems to have a fairly well defined motto – if something needs to be done, just do it! Don’t wait for others to do it for you!

At almost all the homes we visited, she simply became one with the family and the hosts were quickly put at ease. She is sharp-witted and makes a point of learning the names of people she meets. I would say that she is an ace when it comes to remembering all those names too! Didi Maa is quite sporty when it comes to trying out new cuisine. The daughters of our hosts in London had gone through a great deal of hard work to prepare vegetarian lasagna for Didi Maa! Didi Maa did not let them down – she tried the delicious serving and bestowed lavish praises on the proud girls.

I have to admit that in my opinion Didi Maa is a living testimony of God within every human being. Her life is a remarkable combination of devotion to God and service to society. Didi Maa believes that “Service to humanity is service to God” and has devoted her life to the Vatsalya Gram project. I am touched by her exceedingly compassionate rapport toward all people. It would, thus, be no exaggeration to say that Didi Maa, by the virtue of her own conduct is a true embodiment of that Vatsalya which Maa Yashoda had cherished for her Yogeshwar, Shree Krishna.

One of the most significant aspects about Didi Maa that I applaud is her dedication to the Vatsalya Gram project and the manner in which she is focused on the project. Throughout the time that I spent with her, I found her to be fully prepared with photographs, literature and all related details about Vatsalya Gram. And thanks to Didi Maa’s unflinching determination and the support of her many followers, Phase One of Vatsalya Gram is ready and has been inaugurated. At this rate, I envision a Vatsalya Gram in almost every nook and corner of the globe!

I found Didi Maa to be very humble in her ways, yet infused with the towering strength and fortitude required of Maa Bhavani. She appears to possess tremendous inner strength, which is evident in the manner in which she lives her life. Didi Maa is a giant amongst us and I feel especially blessed to have had the opportunity to be enlightened by her company. I look forward in earnest to serving Didi Maa, my loving Guru and my guide, again in the future.