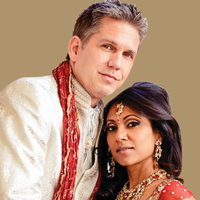 The fairy tale story of Nandra Devi Mansaram and Marc Thomas Albinger takes you through beautiful locales all over the world before culminating in a romantic wedding. The couple met in 2007, and two and half years later they were engaged. Their shared values make them ideal life partners.

Marc proposed on the rocky grounds of the scenic Caldera Cliff on the Greek island of Santorini, which overlooks the Mediterranean. The location was perfect, the proposal was perfect and it was a perfect beginning of a lovely life together.

After procrastinating for two years after the proposal, Nandra and Marc decided it was time to officially say “I Do.” Marc, who is Catholic, wanted a simple wedding. But Nandra, a typical Indian, always dreamt of a grand, traditional celebration. What followed was a lovely confluence of both cultures.

The couple planned a family trip to Europe during June-July 2012. Stunning beautiful locales in Germany, France, Italy and England tugged at Marc’s heart and he wanted the ceremony there. Nandra acquiesced, stalled her plans for the Indian celebration and began planning a wedding abroad. The couple made their own arrangements. Nandra’s family and Marc’s daughter were present for an intimate ceremony held at an 18th century Villa del Balbianello in Italy with the stunningly gorgeous Lake Camoin the background.

The bride and groom arrived in a Rolls Royce for the wedding. The ceremony took place in the indoor courtyard of the first level, after which the guests moved into the English bar room for cocktails. A four column gold mandap decorated with orchids, black/red roses and hanging crystal votives was created for the ceremony.

The venue was done up in tall centerpieces, off-white hydrangeas, black magic roses, jamesstorie red orchids, mockara orchids, and purple dendrobiums. The deco-ration theme was gold, red and bling. The programs, designed by the couple, had a complete expla-nation of Hindu customs along with a verse from the Rig Veda.

Dinner was served on the Royal Mezzanine and Sky view Terrace on the second floor. Tables were laid with burgundy / red table cloths that had Indian / Moroccan motifs done in gold, tall center-pieces, charger plates and gold chivari chairs.The reception was arranged on the third floor of the Cruz Ballroom and Terraza De Leon. This level was accentuated with up lighting was accentuated with up lighting in aqua, lavender and pink shades. White leather glow furniture dotted the terrace. Nandra designed a candy station for the reception as well as a gorgeous three-storied cake topped with the couple’s monograms. Music was played by a traditional Indian Tassa band. There was a mix of love songs, western music and traditional Indian wedding songs.

Marc and Nandra suggest that would-be couples take off from their work at least a couple of weeks before the wedding so that everything can be arranged flawlessly.

Sonya weds Vikram
How to Lose Weight the right way for your Wedding By: Saira Gillani, ND