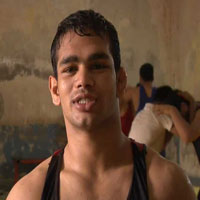 The suspense over wrestler Narsingh Yadav’s Olympic participation was today prolonged further after the National Anti-Doping Agency deferred its final verdict on the doping scandal surrounding him to Saturday or Monday at the end of a two-day hearing here.

A day after Narsingh and his lawyers presented their case on the failed dope test, which according to them, was a conspiracy against the grappler, NADA’s legal team gave its arguments against the sabotage theory before the disciplinary committee.

“Hearing has been concluded today. The judgement will come out either on Saturday or Monday,” NADA’s lawyer Gaurang Kanth told reporters at the end of the hearing today.

“The argument by NADA was that he is not eligible for remission which he has been asking. Narsingh did not produce the relevant circumstantial evidence that there could have been sabotage as had been claimed by them,” he added.

“They filed an affidavit that his drinks or water was spiked but they did not produce the evidence to prove it to satisfy NADA and WADA,” he argued.

The wrestler, who has alleged the involvement of fellow grapplers in the conspiracy, has already been replaced by Parveen Rana in the Olympic bound squad but will be reinstated if he gets a favourable verdict from NADA.

NADA’s lawyer, however, today said that Narsingh’s claims of conspiracy are not backed by sufficient proof.

“We argued that the requirements of due diligence and care which was needed to escape from punishment was not provided as to satisfy the WADA Code. So we said he should be given punishment as appropriate this panel thinks fit,” Kanth said.

“We also opposed his contention that he was not negligent and had not committed mistake in not taking due care as an athlete. We said as an international athlete he should have taken due care about his food and drinks. But from what he had produced before the panel there was nothing to prove due care on his part,” he added.

“So under WADA Code if he fails to prove due care and diligence he should not be given remission and should be punished. The arguments are over let us see what the panel decides.”