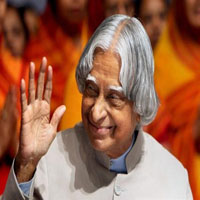 The two ministers, then, unveiled a six-feet statue of Dr. Kalam along with laying the foundation stone of a memorial for Dr. Kalam.

The day of 27th July, 2015 started off on a normal note, but people of Shillong, India and the world were in for a rude shock as the news that came in simply was unbelievable for everyone.

A year has passed by but no one can forget the spontaneous outpourings of the common people soon after the news broke that the People’s President has been admitted to Bethany Hospital Shillong after he collapsed while delivering a lecture at IIM Shillong on July 27, 2015.

Emotions ran high as thousands thronged the city hospital, eager to know the condition of their beloved president.

IIM Shillong which had seen many an innovative lecture delivered by the former president, recalled the creative yet humble nature of Dr Kalam. Their heart pounded faster than usual while their tears rolled down their cheeks, soon after they received the news that Dr Kalam’s heart gave up just minutes after he was admitted.

Amongst most people, the students of the IIM who spent most of the time with Dr Kalam couldn’t simply believe the fact that the same mentor, who was delivering lecture just moments ago, was no more.

Dr. APJ Abdul Kalam lives on in the hearts of people of Shillong and today they are paying tributes to the People’s President-remembering him as a person, as a teacher and as a friend-philosopher- guide.