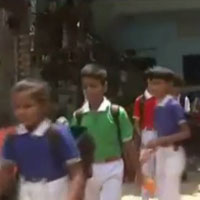 A school in Uttar Pradesh’s Allahabad that reportedly never allowed the singing of the national anthem , has been shut down and its manager has been arrested after several teachers resigned over his refusal to allow the anthem on Independence Day.

Zia-Ul Haq, the manager of the M.A. Convent School, has been arrested under a law against “Insults to National Honour”. He has also been accused of running the school illegally.

Meanwhile, the principal and eight teachers of a school in Allahabad have decided not to report for duty in protest against a ‘ban’ by the school manager on singing the national anthem and national song in the morning assembly.

According to the Principal the school manager clearly said he won’t allow singing of national anthem and national song as it is against the principles of Islam.