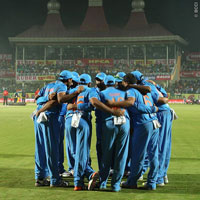 The Working Committee of the Board of Control for Cricket in India (BCCI) announced the two T20 International matches against the West Indies in Fort Lauderdale, Florida.BCCI President Mr. Anurag Thakur said, “As part of our continuous efforts to reach out to new markets and audiences, I am very happy to announce that Team India will play two T20Is against the current world champions West Indies in the United States. This will be a great opportunity for the cricket fans in America to watch the two champion sides in action. This will be developed into an annual cricketing event in the United States.”Mr. Ajay Shirke, Hony. Secretary, said: “This initiative is path breaking in terms of the expansion of our great sport. It is our endeavour to make every possible effort to connect with fans in different parts of the world.”WICB President, Whycliffe ‘Dave’ Cameron said: “This will be a great initiative in our continued efforts to develop cricket in the Americas (North and South America) a very important market.The details are as under:

The Following players are schedule to play from each Team.

The Board of Control for Cricket in India (BCCI) announced that the ticket sales have not yet commenced for the India vs. West Indies T20I matches being hosted by the BCCI on August 27 and 28, 2016 in the United States of America.

The BCCI will make a formal public announcement upon the release of the tickets and will also notify the identity of the official ticketing partner for online and box office ticket sales once determined. Members of the public and cricket patrons are requested to await these announcements before purchasing or ordering tickets for these matches and, further, are cautioned against buying or placing orders from any unofficial sources either online or at the box office.

The BCCI takes the issue of counterfeit ticketing and sales by unauthorised ticket agents extremely seriously. Tickets purchased or ordered through unofficial vendors could lead to non-admittance to the stadium and purchasers thereof being unable to access venues. Corporate customers and private individuals should only purchase tickets from the official channels, as shall be notified, to avoid disappointment.