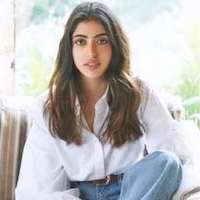 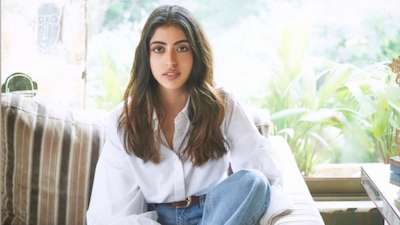 She captioned the post “at home with @rohanshrestha & @alliaalrufai”, followed by a bunch of emojis of a person bowing.

In the snapshot, Navya is seen smartly attired in high-waist blue denims and a crisp-collared, oversized white shirt. She has also accessorised the look with a brown belt. Her hair has been left loose, with a simple parting in the middle; and she is sitting on a striped sofa in a couple of different poses.

The post attracted several comments from a number of Navya’s friends and star kids, as well as from her mother – and from Amitabh Bachchan’s daughter Shweta Bachchan Nanda, who wrote, “You clean up well.” Actor Shah Rukh Khan’s daughter Suhana Khan also commented, “Wowww.”

Navya has also given us a glimpse of a nook in the house. The back of the sofa faces a glass pane with a semi-transparent curtain that is billowing in the wind. Peering through the glass wall behind it, you get to glimpse the lush greenery beyond.