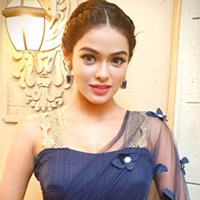 After the appearance of the much-awaited Mr. Bajaj, Ekta Kapoor has again finalized a new face to join Kasauti Zindagi Ki – it’s none other than the Daiyyan of Nazar Sonyaa Ayodhya. A close source to the daily soap reported, “Sonyaa has been roped in to play Tanvi, a glamorous, rich and elegant lady, who stays with the Bajaj family. Rishabh’s (Karan Singh Grover) aunt treats her like her daughter.” Sonyaa Ayodhya shot to fame as Ruby, the Daiyyan of the supernatural-themed TV show, Nazar. She confirmed the news by saying, “Yes, I had given the look test for the show last week and got a confirmation recently. As of now, that’s all I can reveal.” When asked about her role as Ruby in Nazar, Sonyaa said, “I have not shot for Nazar for two months and I am not sure about the future of my track. I won’t confirm or deny whether I have quit the show or not.” Looking at the past performance of Sonyaa in Gul Khan’s Nazar, it is expected that she will continuing her magic in the Star Plus serial as well.