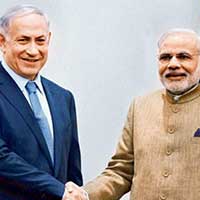 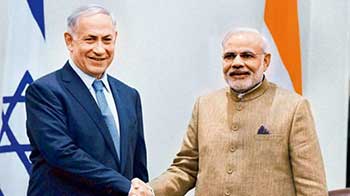 Israeli Prime Minister Benjamin Netanyahu’s Likud Party has put banners featuring Narendra Modi and Donald Trump. The banners have come ahead of the unprecedented snap polls on September 17. Russian President Vladimir Putin has also been featured in the banners along with India and American heads.

Netanyahu’s closeness with the three world leaders have been making news since last year and can be an effective way to lure support and votes from the masses. The headquarters of Likud party in Metzudat Ze’ev 38, King George Street, in Tel Aviv said that Netanyahu is in a totally “different league” where he sets a well-diversified example of leadership mingling with the best of state leaders.

Israel’s Prime Minister will be coming to India on his one- day-long visit to meet the host PM on coming September 9. The meeting will be just prior eight days before the repeat polls in the Jewish state. Netanyahu created history by becoming the longest-serving Israeli Prime Minister in the history of the country. He surpassed Israel’s first premier David Ben-Gurion on July 20. But presently, he is facing a tough political challenge as opinion polls show flagging fortunes for his ruling Likud party.

It will be really interesting to see whether his Government comes back or not, as Netanyahu is trying head-to-toe for ensuring his audience.

The headquarters of Likud party in Metzudat Ze’ev 38