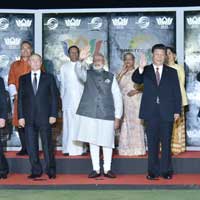 Just as the 5 BRICS nations concluded a fruitful summit enhancing cooperation on several key aspects like economic cooperation and on improving cooperation to work out strategies for combating global terror, A Vibrant picture of 7 BIMSTEC nations led by Prime minister Narendra Modi emerged as another powerful bloc.

Together the 11 leaders posed for a photo-session symbolizing the coming together of the Asian countries as a formidable bloc of nations which by cooperation and better business relationship can lead to the common objectives of poverty alleviation, infrastructure development, connectivity and economic parity between the developed and the developing world.

In his opening address at the BRICS-BIMSTEC plenary session, Prime Minister Narendra Modi spoke about the combined clout of the 11 nations and their ability to shape Global economy.

However he once again underlined the importance of combating terror and pressed member nations of BRICS and BIMSTEC groupings to send a clear message to those who “nurture the philosophy of terror that they stand isolated in the civilized world.”

Prime Minister also said that technology can bridge gaps and connect communities. It can also deliver services that make a difference to the common man’s daily life.

He listed environment and disaster management as areas where BIMSTEC can work together.

He also drew common grounds between BRICS and BIMSTEC.

He concluded by saying that common problems can be solved through solutions presented by an interconnected world.

The leaders of Bay of Bengal Initiative for Multi-Sectoral Technical and Economic Cooperation OR BIMSTEC exchanged ideas towards achieving sustainable growth.

The enhanced focus is leading to new projects on connectivity, building infrastructure and sharing resources, both inter-regionally as well as bilaterally.

India’s thrust and interest in developing its “Act East’ policy has given the much needed fillip to the seven-nation grouping of Bangladesh, Bhutan, India, Sri Lanka and Thailand.

Bilateral meetings were held on the sidelines of the BIMSTEC outreach.

Prime Minister Narendra Modi and Sri Lankan President Maithripala Sirisena reviewed the development partnership of both nations during bilateral talks and resolved to find a permanent solution to the fishermen disputes as soon as possible.