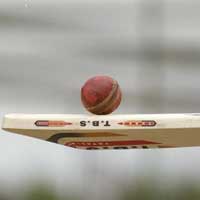 Swapnil Gugale and Ankit Bawane broke a 70-year-old partnership record for all wickets in the Ranji Trophy on Friday championship when they stitched a massive, unfinished stand of 594 for Maharashtra against Delhi in a Group B match at the Wankhede Stadium in Mumbai.

When Maharashtra applied closure to their first innings, Gugale was unbeaten on a career-best 351, that contained 5 sixes and 37 fours off 521 balls, while his third wicket partner Bawane remained unconquered, also on a career-best 258 laced with 2 sixes and 18 fours.

The duo, who had come together within 45 minutes of play starting on the first day yesterday, were unseparated after breaking the previous all-time best fourth wicket partnership record of 577 set by Vijay Hazare and Gul Mohammed for Baroda against Holkar way back in 1946-47 in Baroda.

Maharashtra declared their first innings closed at 635 for 2 to which Delhi replied with 21 without loss in five overs before stumps with openers Unmukht Chand (4) and Mohit Sharma (14) at the crease.

Delhi, at close, were 614 runs adrift of the huge total put up by Maharashtra. Delhi used as many as nine bowlers to break the stand between the 25-year-old Pune-born Gugale and 23-year-old Aurangabad-born Bawane and all came to nought.

Gugale, dropped on 38 and 105 yesterday, had another slice of luck when on 262 as he was let off by Parwinder Awana off left arm spinner Varun Sood. The duo had resumed the innings at the overnight 290 for 2 with Gugale on 152 and Bawane on 120.

Sood and Manan Sharma were the most expensive Delhi bowlers, giving away 107 and 148 runs without taking a wicket.

Delhi were also without the services of their lone wicket taker Navdeep Saini who left the field early in the morning after pulling a stomach muscle and did not bowl again.