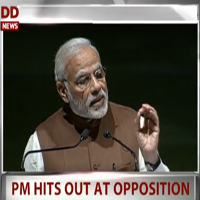 On the last day of the Winter Session of Parliament, the BJP took on the Opposition and specifically the Congress stating that the Narendra Modi government is doing what Congress failed to do since 1971.

Prime Minister Modi also addressed Party MPs on a variety of issues including demonetisation at the BJP Parliamentary Party meet.

The meeting was called on the last day of the Winter Session of the Parliament as the deadlock on demonetisatin continued to disrupt regular business in both houses.

The winter session of Parliament remained stalled by the Opposition over the Centre’s demonetisation drive against black money and corruption.

It prevented Prime Minister Narendra Modi from putting his point across to the nation through Parliament.

It was during BJP Parliamentary party meet on the last day of the session that the Prime Minister trained his guns on the opposition.

He said the Opposition is panic stricken over the government’s anti-corruption drive.

Adding that the party’s interest takes primacy for the congress while for the BJP national interest is supreme.

The Prime Minister said earlier the Opposition used to come together to battle 2G and Coalgate like scams but now it has united against the government’s efforts to fight black money and corruption.

He also expressed concern over falling political standards and public life saying it has come down to a situation where proof is demanded of the army’s valour.

He did nothing during his 10-year reign.

He also took aim at the Indira Gandhi government saying the Wanchoo committee had recommended demonetisation as far as in 1971 but she didn’t do anything to tackle the problem.

The Prime Minister also targeted Left parties for their stand and recalled late left leader perspective on the issue.

He recalled how left parties earlier supported demonetisation but have now switched sides to stand along with the Congress.

Citing the support of Odisha Chief Minister Naveen Patnaik and Bihar CM Nitish Kumar, the Prime Minister said even those ideologically opposed to the BJP are with it in this fight.

Prime Minister clearly said that if the nation is to be rid of ills like corruption and black money tough decision will have to carried out.

He referred to demonetisation as a key juncture but not the destination suggesting additional steps are yet to unfold.