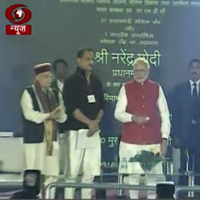 Prime Minister Narendra Modi laid foundation of the first-ever Indian Institute of Skills of the country at Kanpur in Uttar Pradesh today.

The institute is aimed at making youth more employable and self-reliant. The institute has been conceptualised by the Prime Minister during his visit to Singapore’s Institute of Technical Education.

The institute is expected to provide essential employment capabilities to the youth of the most populous state of the country.

Further, PM Modi also addressed his sixth Parivartan Rally in Kanpur today as part of BJP’s election campaign for the ensuing assembly elections in the state. He targeted the opposition over stalling parliament and running away from a debate.

He siad that the government’s will benefit the poor and weed out demonetisation. He further said that a storm rather than a wave of change was sweeping across Uttar Pradesh.