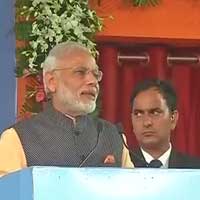 PM Modi dedicates a War Memorial to the nation in Bhopal; showers high praise on contribution of soldiers to the country; PM says army believes in acts of valour, not words.

Prime Minister Narendra Modi praised the soldiers at the event of inauguration of the Shaurya Smarak, built to honour the country’s braveheart martyred soldiers in Bhopal.

The Shaurya Smarak is spread over an area of 12.67 acre land and the tales of their bravery are on display at this memorial.

Without naming the surgical strikes that were conducted across the LoC after the Uri attack, the Prime Minister said that the most important weapon of the army is its morale and will power.. the army does not believe in speaking but in displaying its valour.

He also said that the army never “forgives” the country if it is found “sleeping” when it should be awake.

Prime Minister Modi also said that there are war memorials, there are memorials for martyrs but shaurya smarak includes everything. Praising the memorial, PM Mdoi said it is like a pilgrimage site.