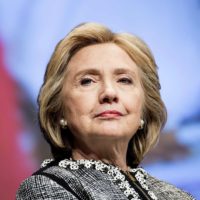 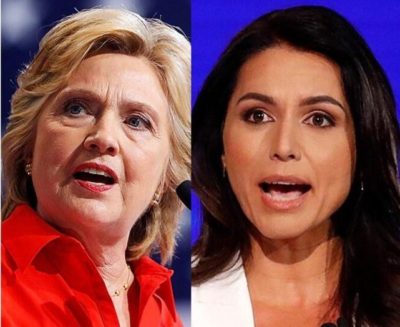 In the war of words ensued between Congresswoman and Presidential Candidate Tulsi Gabbard and Hillary Clinton, the former slammed the latter as “queen of warmongers.” The former US Secretary of State, Hillary Clinton alleged that Democratic candidate Gabbard was being “groomed” by the Russians as the third-party candidate for the 2020 presidential elections.

In an interview, Clinton said “I think they’ve got their eye on somebody who is currently in the Democratic primary and are grooming her to be the third-party candidate.” She further added, “She is the favorite of the Russians. They have a bunch of sites and bots and other ways of supporting her so far.” Clinton however did not directly name anyone, but reports pointed out that the statements were an attack on the Indian American presidential candidate. No evidence has been offered to support any assertions made nor any allegations have been proved regarding Gabbard’s association with Russia.

Gabbard fired back at Clinton when she tweeted, “Great! Thank you @HillaryClinton. You, the queen of warmongers, embodiment of corruption, and personification of the rot that has sickened the Democratic Party for so long, have finally come out from behind the curtain.”

Gabbard also claimed that she has been facing concerted campaigns to “destroy my reputation” from the day she announced her candidacy. “We wondered who was behind it and why. Now we know – it was always you, through your proxies and powerful allies in the corporate media and war machine, afraid of the threat I pose,” Gabbard said. And, she even challenged Clinton when she said, “It is now clear that this primary is between you and me. Don’t cowardly hide behind your proxies. Join the race directly.” Gabbard is a fourth-term Democratic Congresswoman from Hawaii.