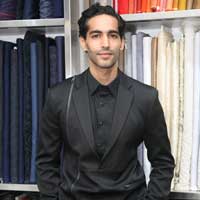 Recently at the Santa Cruz showroom of men’s couture label Prima Czar, the cast of Rakeysh Mehra’s latest epic Mirzya were present to talk about some of the costumes that were designed by the brand. Anuj Choudhry, who plays Karan, along with Saiyami Kher who plays Suchi in the film were both present along with the Co-founder of the brand, Prakash Arora.

Prima Czar, having designed outfits for some of the biggest celebrities in Bollywood took on creating the outfits for a film for the first time with Mirzya. Brought on board a few months before filming began, Prima Czar’s Co-founder, Ravi Arora in consultation with the film’s stylists created most of the outfits you will see in the film for the character played by debutant Anuj a prince who is engaged to Saiyami character. Debonair and sophisticated, his outfits required well-cut, stylish suits, trousers, shirts and jackets along with chic yet traditional Indian wear all of which is something that Prima Czar has always specialized in. Additionally the brand has also designed wardrobe for Art Malik’s character, Suchi’s father, the Police Commissioner and for K.K. Raina’s character, Karan’s father, Bade Maharaj. The fact that Prima Czar has some of the best fabrics available in the city along with exceptionally talented in-house designers and masters is what has made them the destination store for so many celebrities and designers alike. Their contribution, especially when they were short on time has proved very valuable to the entireMirzya team.

Speaking about the association, Ravi Arora, Co-Founder of Prima Czar says, “It was an honour creating the outfits for the ‘Mirzya’ team. I wish them all the success for their film.”

Prima Czar, a boutique studio for men was set-up by Prakash Arora and his son Ravi Arora in 2012. Having been in wholesale textile trade since 1970, with their strong inroads into the industry and the goodwill established through two generations of business practice, the Arora duo saw tremendous potential in diversifying into fashion retail and rolled out their first, single-brand outlet. Today, Prima Czar offers an unparalleled experience of men’s customized clothing, shoes and accessories, with a range of exciting services to make shopping fun and convenient for men who like to dress well.

Prima Czar has designed outfits for some of the biggest celebrities in Bollywood, Industrialist, and Politicians.

Customers can choose from a wide range of internationally branded as well as the best of Indian exquisite fabrics that are tailored according to every individual’s specific requirements.