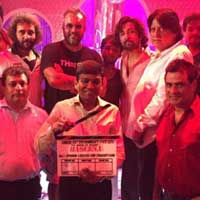 Siblings Siddhanth Kapoor and Shraddha Kapoor will be seen sharing screen space for the very first time in Apoorva Lakhia’s gangster flick Haseena, which is based on the life of Dawood Ibrahim’s sister Haseena Parkar and the film went on floors a couple of days back.

We have heard that Siddhanth, who will be seen essaying the role of Dawood in the film, recently shot for an item song, which is being termed as the only light moment in the dark and gritty film. A source attached to the film said that the dance sequence is an incident out of Dawood’s early days when after a successful mission, Dawood and his men head to a dance bar, get drunk and break into a jig. It is being said that Apoorva thought of making Dawood dance in the club sequence only after he realized how well junior Kapoor dances.

Produced by Furquan Khan under Swiss Entertainment banner, the film stars siblings Shraddha and Siddhant Kapoor as the lead protagonists and is directed by Apoorva Lakhia.