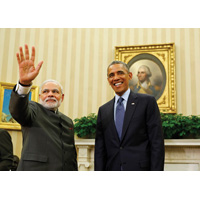 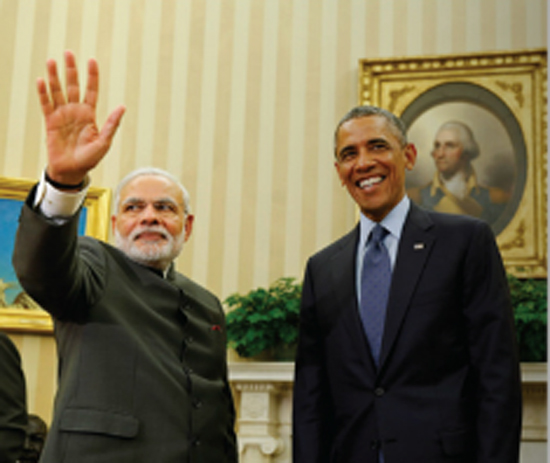 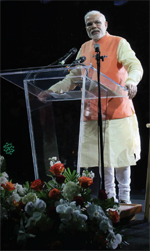 One of the most talked-about, speculated, and most eagerly awaited events is finally here – and the moment is sure to become history. When Prime Minister Narendra Modi announced his trip to America it became fodder for every journalist, and his every move thereafter was scrutinized carefully. As plans began to unfold into reality, Modi’s journey was everything and more. Prime Minister Narendra Modi has done it yet again.

The making of Narendra Modi is not the ordinary rags to riches story. An inspiration for millions, his story is so hard to believe and even defies logic. It is hard to imagine a modest tea seller setting his sights on a future as Prime Minister of India.
To say that the climb to the top was arduous is putting it mildly. For a determined mind and clear vision, difficulties only pave the way for greater achievements. In time and after much hard work, Modi became the Chief Minister of Gujarat, a position he held from October 2001 – May 2014. He spent those years 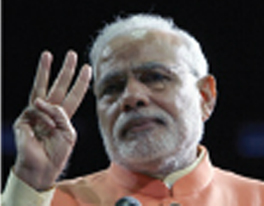 developing the state’s economy and showcasing its success as a prototype for the India he envisioned. Riding this wave of momentum, Modi then carefully positioned himself as an appropriate choice for Prime Minister.

The most recent election was not only one of the most followed, but also one in which individuals were active participants. Modi has the ability to appeal both to the masses and the elite, tapping into the needs of citizens wherever he went. His campaign was beautifully orchestrated and his charisma inescapable making the election results astounding. Never before had any one party swept an election with such conviction, all of which was single-handedly managed by Narendra Modi.

The journey was, however, not one with the perfect path laid out. Along the way, Modi dealt with his share of critics. While on one hand, the growth and success seen in Gujarat makes it an example of the model state, Modi may never absolve himself completely of his actions during the deadly 2002 Gujarat riots. After all, he was denied a visa to the United States on the grounds that he did not do enough to step in and control the riots at that time. Only recently, when Modi looked to be a favorite and frontrunner in the elections did the US begin to change its tune. 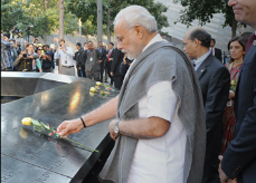 Clearly, the tables have now turned in Modi’s favor. Everyone seems to be vying for a piece of this charismatic leader. Modi, on the other hand has begun to go about diligently meeting the goals he set during the election. Streamlining simple processes and improving accessibility for the common man are among the most important items on the agenda. Cynics continue to ask for tangible outcomes, but fail to realize it takes more than just a few months to undo damage and steer the country on the path of true progress.

For his monumental trip to the US, much was on the agenda. Though meetings with distinguished Americans and trips to prominent places in the US were highlights, the agenda went far beyond the surface. The focus of Modi’s trip was to discuss measures to counter terrorism, ways to strengthen economic ties between the two nations, and promote collaboration in the field of education.

Everyone hopes this trip will yield promising results in the future. In the meantime, Modi’s address at Madison Square Garden in New York City on September 28 is one none will soon forget. Proof of Modi’s popularity can be seen in the fact that tickets to the event were booked weeks prior to his arrival. Many were even willing to take a chance on placing their name on a wait list in the rare case of cancellations. 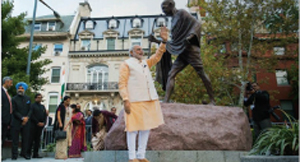 Indian Americans, Miss America 2014 Nina Davuluri and PBS NewsHour Weekend Anchor Hari Sreenivasan, emceed the historic event. Speaking to a crowd of nearly 20,000, Modi did what he always does best – spoke from the heart. He spoke in Hindi, making it clear that he was wished to be earnest with the audience, rather than just impress. Amid the chanting of “Modi, Modi, Modi …” and rapturous applause, the charismatic leader enthralled the audience with his inspiring address. From economic development and defense issues to infrastructure and government transparency, Modi covered a range of topics, each of which engaged the audience. 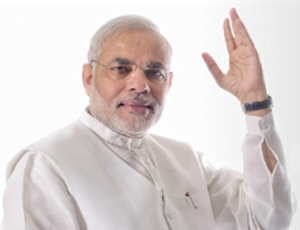 Modi has always been known for his rhetoric, and he was in his element as he ensured people in the attendance felt that he was speaking to them personally. While people quickly filled the venue for the moment of a lifetime – an opportunity to get a glimpse of India’s Prime Minister and hear him speak, others gathered around outside the celebration to watch him on the giant screens that were set up to allow additional viewing options. The address by Modi became an occasion where varied Indian communities came together as one as they gathered at common venues to watch, listen and cheer their idol. Catering to millions of others on the Internet was live streaming of the speech with subtitles in English.

A landmark occasion, Modi’s US visit will not be soon forgotten. Not only is Modi the first Indian dignitary to receive such an overwhelming response, but he is also a political figure like no other on the world stage at the moment.

His visit gives much importance to the Indian sub-continent as well as the diaspora. Clearly, Indians have made a significant contribution and huge impact in America, and the value of their presence was clearly felt over the weekend’s events. If their status can be acknowledged as more than just tax-paying individuals, it will be an achievement of sorts.

Prime Minister Narendra Modi may have great plans for the country and its people, but what matters most to him is that he is the repository of the faith of Indians. Working for them with integrity and

commitment is paramount to him. Thus far, he has done little to disappoint.

In reviewing the life of Modi, it is clear his visit is for personal gain, but rather to leave a legacy. It may be presumptuous to link him to Gandhi, but there is an underlying similarity. After the promise of Vivekananda, Modi is the next Narendra to have won the hearts of the world with his oratory skill and sincerity. We can only hope that the profundity of his talk can be matched with deed. India is then well on the path to becoming a force to reckon with on the world stage.