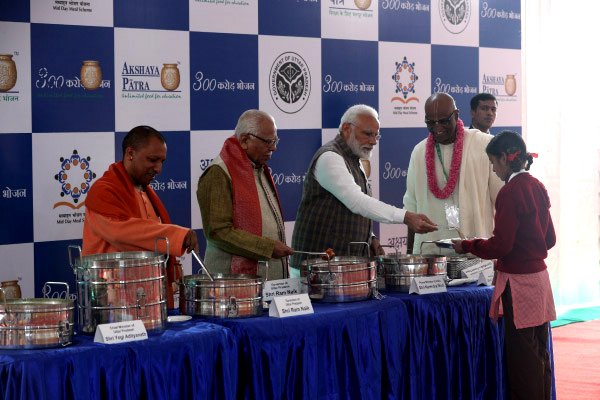 The event was also attended by prominent personalities from the corporate sector and other esteemed organizations who have been supporters and well-wishers of the Foundation throughout its journey.

All the dignitaries congratulated Akshaya Patra on attaining the milestone of cumulatively serving 3 Billion meals and pledged their support to the organization’s Endeavour.

Prime Minister Narendra Modi unveiled the commemorative plaque to mark the serving of 3 Billionth meals by Akshaya Patra. He addressed the gathering and showed his support to the Foundation’s initiative by serving the ceremonial 3 Billionth meal. The Prime Minister, much to the delight of the children, even shared meals with them.

Shri Madhu Pandit Dasa expressed his delight over having reached this milestone and conveyed his gratitude to all the stakeholders, including the Government of India, Ministry of Human Resource Development (MHRD), State Governments, corporate, donors, partners, and the community at large, for their continued support. He also reiterated the commitment to serve hot, nutritious, safe, and tasty meals to children every school day and further added that the Foundation will strive to enhance the impact of mid-day meals through various innovative initiatives.

Akshaya Patra is a not-for-profit organization, which strives to address classroom hunger and bring children to school by implementing the Mid-Day Meal Scheme in Government and Government-aided schools. Since 2000, the Foundation has worked towards reaching more children with wholesome food on every single school day. The Foundation is continuously leveraging technology to cater to millions of children. Its state-of-the-art kitchens have become a subject of study and attract curious visitors from around the world.

In partnership with the Government of India and various State Governments, and the inestimable support of many philanthropic donors and well-wishers, Akshaya Patra has grown from humble beginnings serving just 1,500 school children across five schools. Today, Akshaya Patra’s Mid-Day Meal Program me is the world’s largest (not-for-profit run) school lunch program, serving wholesome food to over 1.76 million children from 14,702 schools across 12 states in India.

In 2012, Akshaya Patra reached its first major milestone of serving 1 Billion cumulative meals since the inception of the program in 2000. By 2016, the organization had already served a cumulative 2 Billion meals. That milestone was
commemorated in the presence of Shri Pranab Mukherjee, the then President of India, on 27th August, 2016, in Bengaluru.

Akshaya Patra is the world’s first NGO-run school meal program to achieve the milestone of serving 3 Billion cumulative meals. It is a major milestone in the Foundation’s pursuit of the mission to serve meals to 5 million children every school day by 2025. With the support of the Government, donors, and all the other stakeholders, the organization is poised to realize its vision ‘ no child in India shall be deprived of education because of hunger

Click here to find out more information and donate