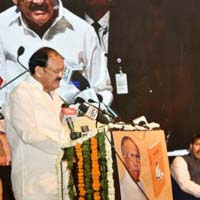 The Vice President of India, Shri M. Venkaiah Naidu has advised the youth to protect preserve and celebrate Indian culture and traditions and youth that are both present and future of this country can achieve their life’s goals with hard work and dedication. He was addressing the gathering after releasing a Book titled ‘Bhavdiye’ based on Compilation of Letters written by Shri Kedar Nath Sahani, here today. The Union Minister for Science & Technology, Earth Sciences and Environment, Forest & Climate Change, Dr. Harsh Vardhan and other dignitaries were present on the occasion.

The Vice President said that Shri Kedar Nath Sahani was a writer, freedom fighter, social reformer and an icon who inspired others all over his life. He further said that during his long public life, he ensured freedom to his writers or scholars while he was an editor.

The Vice President said that that compilation of letters of Shri Kedar Nath Sahai is an important source of research for younger generation. The Compilation allows to get the author’s unbiased personal views on the then political, social scene, he added.

The Vice President said that the problem of Kashmir is still a challenge for the country and everyone will have to make a collective effort for a peaceful environment.