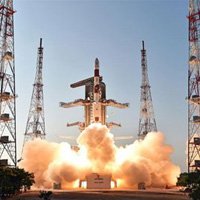 Giving details about the upcoming Chandrayaan-2 mission, Dr Sivan informed that the total cost of the mission is about Rs. 800 crore, which includes Rs. 200 crore as the cost of launching and Rs. 600 crore for the satellite. This cost, he said, is almost half of the launch cost if the same mission had to be launched from a foreign launching site.

Chandrayaan-2 will be equipped with a lander and rover probe, which will descend on the surface of the moon, from where it will observe the lunar surface and send back data, which will be useful for analysis of the lunar soil.

Dr Jitendra Singh not only appreciated Chandrayaan-2 for being a cost-effective mission but also lauded it for being totally indigenous in its expertise, manufacturing and material, which makes it an appropriate example of Prime Minister Shri Narendra Modi’s “Make in India” Mantra.

Another ISRO Mission, GSLV Mk III-D2, scheduled for June-July this year, also came up for discussion.