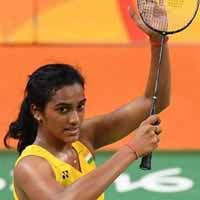 PV Sindhu jumps to career-best no. 5 in BWF rankings

Shuttler PV Sindhu became the second Indian woman to break into the top-five of the badminton singles world rankings. The Olympic silver medalist, who broke into the top-10 in 2013, achieved her career-best ranking of No. 5 on Thursday.

This is the first time that Sindhu has broken into the top five. Former world No. 1 Saina Nehwal is only other Indian woman to achieve such a feat.

Sindhu, in contrast, had probably the best year of her career as she won the Silver Medal at the Rio Olympics.

In the process, she became the first Indian woman to win an Olympic silver medal and only the second Indian to win a badminton Olympic medal after Saina.

Sindhu then went on to win the Chinese Open, her first ever Super Series triumph.

She then almost got a second Super Series title on the trot but went down in the final of the Hong Kong Open. Sindhu has most recently won the Syed Modi International Grand Prix.

Meanwhile, Saina Nehwal remained static at No. 9, while Ajay Jayaram is the top-ranked Indian in men’s singles at No. 18.