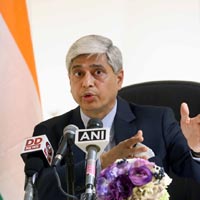 In a recent announcement made by the Government of India, Vikas Swarup will be appointed as India’s next envoy to Canada. Currently he is the official spokesperson of the Ministry of External Affairs of India. He will be the next High Commissioner to Canada.

Vikas Swarup was born in Allahabad and pursued his higher education at the Allahabad University and majors in Philosophy, History and Psychology. He is also well known for his debut novel Q&A which was further adapted into the Academy Winner movie ‘Slumdog Millionaire’ that was critically acclaimed worldwide. He is a successful writer and a diplomat.

Swarup belongs to the batch of 1986 in the Indian Foreign Services. He served in several countries as a mission diplomat. He was posted in Turkey, United States, Japan, South Africa and Ethiopia. He was appointed as the official spokesperson in the Ministry of External Affairs on 18th April, 2015. Since then he is holding the post till date. He succeeded Syed Akbaruddin. Prior to being appointed as the spokesperson, he was serving as the Joint Secretary in charge of the United Nation’s Division of the Ministry of External Affairs.

It has also been revealed that Gopal Baglay will become the new Spokesperson of the Ministry of External Affairs in India. Baglay joined the IFS batch of 1992 and currently heads in dealing the Pakistan division. He was the High Commissioner in Pakistan and handled divisions like Pakistan, Afghanistan and Iran popularly known as PAI. He served in Kathmandu as press counsellor and was also the Director at the Ministry of External Affairs for the publicity department.

Swarup has held several key portfolios in the past and is considered to be the best person to be appointed as the High Commissioner in Canada. It is expected that he would soon work on his new assignments

Post Views: 1,335
PV Sindhu jumps to career-best no. 5 in BWF rankings
First time a record 27 US Congressman travelling to India