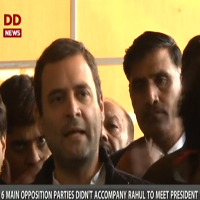 Rahul Gandhi’s meeting with Prime Minister Narendra Modi on Friday morning has dealt a big blow to the carefully crafted opposition unity that held fast through the winter session of Parliament.

The Left parties, the Samajwadi Party, Mayawati’s Bahujan Samaj Party, the Nationalist Congress Party headed by Sharad Pawar and the DMK in quick succession dropped out of the protest march to meet the President, minutes before it was to begin from the Gandhi statue in the parliament premises.

Amidst repeated disruptions and hurling of accusations and counter-accusations in Parliament, Rahul met Prime Minister Narendra Modi along with a farmers’ delegation over their demands.

The Congress Vice-President sought waiver of farm loans halving of electricity bills and higher procurement prices for crops during the meet.

But it was this meet that split the opposition which had been claiming complete unity over its attack against demonetisation. The refrain among miffed opposition parties was that Rahul Gandhi should’ve taken the others along as well.

It was on Thursday that Congress along with other opposition parties had pressed for an adjournment motion on the same issue in the Lok Sabha.

But the next day, the party said the issue has nothing to do with Opposition unity. Later in the day, some opposition parties led by the Congress also met President Pranab Mukherjee over the logjam in Parliament.

The BJP did not miss the opportunity to cock a snook at the Opposition’s disunity.

It’s clear from the way the entire winter session went that opposition came together during its course merely to target the govt.

True colours were revealed as curtains came down on one of the least productive parliamentary sessions in this decade.