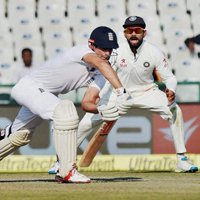 Chennai Test: Moeen century lifts England to 284/4 on day one

All-rounder Moeen Ali lifted England’s sagging spirit by compiling a well-crafted century as the visitors made a solid start against India in the fifth and final cricket Test at Chennai.

Moeen’s 120-run knock was the highlight of the opening day’s play.

Day One in general belonged to the England during the ongoing fifth and final Test at Chennai, as skipper Alastair Cook won the toss and elected to bat first.

Cook and Keaton Jennings did not make any sizeable contributions to the team as they left were reeling at 21 for 2.

Ali and Joe Root put on a 146-run partnership to get their team out of trouble.

Root was dismissed on 88, Bairstow on 49 but Ali, to his credit, held England’s innings together on his way to a fine century, just before the end of the day’s play.

It was a patient knock, there were only eight boundaries in his 100 and he only opened up after the second new ball was taken.

More importantly, his unbeaten knock got England to 284/4 at close and still in chance of putting up a substantial first innings score in Chennai.