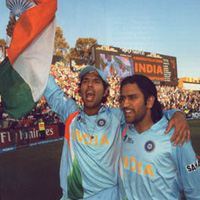 Resurgence of the INDIAN PHOENIX!

One could easily recall the criticism, ignorance, and ha tred the team faced after the World Cup debacle. The players began to lose contracts and endorsements, and so was the game in India, which was regarded as another religion. Even the parent body BCCI took their hands off the team, withdrew the benefits extended to players, enacted a new set of strictly performance-based compensation plans. It seemed that each of the team members were carrying the baggage of disgrace and humiliation on their shoulders. To come out of a stifling environment, superhuman effort would be needed to get support and popularity back. The tour of England provided some amount of oxygen through the test series victory and the hard-fought one-day series defeat at 3-4. The one thing that changed the overall scenario from that of skepticism and gloom to a never-seen-before euphoria was the recent success at the T20 World Cup in South Africa.

Most ironically, India was the last country to agree to a world cup event of this shorter and latest format of twenty overs a side cricket. The team had played only one such game before the World Cup. The Indian team selected for the tournament was almost predominantly young, with an average age of less than twenty-four. The reins of the team were given for the first time to Mahendra Singh Dhoni, the charismatic player from Jharkhand. Other players included those more experienced like Yuvraj Singh, Virendra Sehwag, Ajit Agarkar and Harbhajan Singh, though all were mostly new in the international cricket arena. The big three of Indian cricket, Sachin Tendulkar, Sourav Ganguly and Rahul Dravid, opted out. Hardly any Indian supporters or the Board itself had an iota of hope. The success of this team given it’s bench strength and the team’s experience lent itself to pessimism.

But then, as they say, what happened next is history. One thing cannot be discounted by any means is the fact that India, in this tournament, faced challenges from the first ball. Having conceded a point to Scotland in the first game due to a wash-out, India were under pressure to record a win against arch-rivals Pakistan to save the repetition of being ousted on the first round twice in the same year in a global event. To make matters worse, the batsmen did not fire well and barring Robin Uthappa (50), Captain Dhoni (33), and Irfan Pathan’s late slog (20), others failed to script a good score and India faltered at 141. In response, it was through sheer excellent bowling by Indian pacers that put the brakes on their arch-rival Pakistan. Despite a half-century with Misbah-ul-Haq, they tripped at the last frontier with a scored tied. Then, it was a fascinating bowl-out event in the lines of penalty shoot out in soccer that gave India the winner’s label.

Having made it past Pakistan and into the Super Eight, India faltered at the first hurdle before New Zealand. In response to a mighty 190 posted by the Kiwis, courtesy McCullum (45), McMillan(44), and Oram (35), India squandered a fine start put up by openers Gambhir (51) and Sehwag (40), and they lost their way in the middle , only to fall 10 runs short. This loss made things worse for the Dhoni brigade as they needed to win both their matches at this stage to qualify for the finals.

Next came England and there, emerged the Prince. A fabulous opening partnership by Gambhir (58) and Sehwag (68) certainly gave the platform but it was the Prince, Yuvraj Singh who stole the thunder. His blazing knock of 58 off 14 balls with six successive over-boundaries in an over of Stuart Broad took India to a record 218 run. The dazzle of Yuvi’s blaster left the English awestruck, so much so that in response they fell 18 runs short.

With the do-or-die match against South Africa, the hosts, the entire nation was just beginning to take notice of the event and started praying for another upset. In practice, Indian batsmen without Yuvaraj Singh out with an injury, failed to show the spark that characterized their match against England. Only rookie Rohit Sharma (50*) and Dhoni (45) showed some grit and determination in India’s posting of 153 runs, certainly not enough against a team who are pretty experienced in this form of the game, more so in front of their home support. Against crowd expectations, Indian bowlers rose to the occasion, led by R.P. Singh (4/13) and Sreesanth (2/23) and restricted the Springboks to 116, not only beating them, but also by ousting the hosts from the competition on grounds of run-rate.

The semi-finals were an entirely different ball game as it was against the reigning world champions, Australia. Dhoni and his boys were, by that time, on a different high. Yuvraj Singh again led from the front like a man possessed, his 70 runs coming in 30 balls with 5 sixes, and he was well supported by Uthappa (34) and Dhoni (36). Chasing India’s 188, the Aussies began superbly with the openers Gilchrist (22) and Hayden (62) taking things in a composed manner.

Like in the other semifinal, Pakistan trounced New Zealand to set up a clash once again with India in the grand finale of the T20 world cup. What a dramatic set up for the final, where the two Asian teams, who were first round ousters in the March ICC World Cup, were now fighting for world supremacy in another format of the game! More interesting because at the beginning of the tournament, no one even dared to think that India and Pakistan would go up to this level as both teams were plagued by inexperience and infighting.

In the final match played at the Wanderers, India batted first and posted 157 – certainly not a match winning score. Apart from Gambhir (70) and Rohit Sharma (30*) none others could negotiate the accurate bowling of the Pakistanis, led by Umar Gul (3?28). Coming out to bat, the Pakistan innings were fraught with up and down, though they were not allowed to take the reins, thanks to some precise bowling by R P Singh and Irfann Pathan, backed by a spirited performance at the field by the Indians. Finally, it all boiled down to the last over, where Pakistan, having 1 wicket in hand, needed to score only 13 to win. Captain Dhoni played the biggest gamble of his life as he handed over the ball to a rather inexperienced Joginder Sharma – a surprise choice with still Harbhajan due one.

What followed can only be scripted in a fantasy story. The first ball was a wide, and the next one did not produce a run. The de-facto second ball was pounded out of the ground by Misbah ul Haque, thus bringing down the required run to 6 in 4 balls. Almost all Indian supporters were resigned to their fate, but at that moment God was probably an Indian. The third ball of Joginder was on the stumps, Misbah tried to scoop the ball over the wicket-keepers head, he failed to generate the shot, and it landed down in the safe hands of Sreesanth, giving India an incredible victory by just 5 runs. Hurray! India won the World Cup! It was then that frenzy and frolic erupted, with a never-before-seen victory lap with national flags in each player’s hand.

The win has brought new life and momentum to Indian cricket as was witnessed in the welcome reception of the victorious brigade in Mumbai, where lakhs thronged the area from the airport to the Wankhede Stadium. There the team was given a true winners welcome. It was indeed a proud moment for every Indian on winning the 20-20 World Cup, after a gap of 24 years. The Indian lads brought back the world cup and some lost glory to the game.

The progress of this spirited young bunch of team members’ throughout the tournament was a feat in itself. Truly, the achievement was indeed a result of true belief in the power of youth. It was a team that did not dwell in the past, had no fears while facing tough opponents. They did not buckle under the pressure against arch-rivals Pakistan.

Moreover, this tournament, apart from emphasizing the role of youth and bringing back glory to cricket in India once again, has also highlighted that the game is not restricted to the elites. The Captain, M.S. Dhoni, hails from Ranchi and had a middle-class upbringing. R.P Singh from Lucknow also had a very humble upbringing. Joginder Sharma is the son of a pan-seller. Despite the barriers and their socio-economic background, these players had faith in themselves and bagged the opportunity with both hands when it was presented before them. They believed in their commitment to the country and in their mutual spirit, a manifestation of what has been aptly reflected in the brilliant display of their abilities.

If there was something that made this miracle happen, it was the passion and exuberant attitude shown by each player, their commitment, and belief in the power of youth. The young captain had a vision, took a calculated risk, was fearless without being arrogant, and managed the team well. Each team member showed their talent in appropriate situations, and in no time … History was written!

In hind sight, it will not be an exaggeration to state that triumph at the T20 World Cup is not just any other victory, but it has also given Indians enough to think about. Like the Indian team’s brave performance, we all should take care not to drift from the vision set before us, not to hesitate in taking decisions in the larger interest of the organization, have faith in the youth, and above all, have passion and right attitude! Success will invariably follow!

Post Views: 978
Diwali – The Festival of Sweets
Diwali for Kids