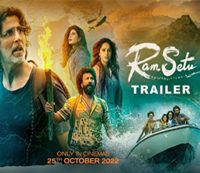 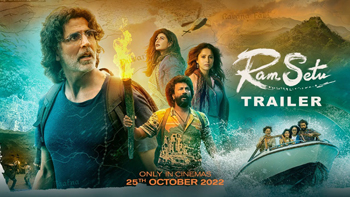 Ram Setu is miles apart from the average Bollywood masala movie. It is like a breath of fresh air in the world of typical Hindi movies featuring either romance or action. It is an adventure movie — seldom made in Bollywood — a movie that is based on Indian themes and traditions that is going to inspire young people, especially teenagers.

The movie begins with the mention of cultural bonding between Afghanistan, Pakistan, and India and the destruction of Bamiyan Buddha by the Taliban. The plot of the movie revolves around the request for the destruction of the Ram Setu for a multi-crore shipping project. Akshay Kumar, playing the role of the Joint Director of the Archaeology department Dr Aryan Kulshrestha, is pressured by the government to submit a report on the Ram Setu that it is not man-made, but rather a natural formation.

With Aryan being an atheist, his report would not hurt any religious sentiment in breaking the Ram Setu. However, looking into the matter, Aryan found a deep-rooted truth and the cultural heritage and integrating powers of the Ramayana. His exploration and detailed research lead him to discover the closely intertwined relationship between history and mythology.

Aryan’s search and exploration reveal many truths to the viewers. He, too, goes to Sri Lanka in search of the truth. The visuals are extremely beautiful, with all credit going to Aseem Mishra and his camera. The stunts are also quite appropriate. The viewers get to see chases, suspense, courtroom arguments, and strong religious reasoning. Ram Setu was built by none other than Lord Rama, and apart from being a bridge, it is a symbol of protection of the Lord for all women whenever they are in danger.

Akshay Kumar gave a stellar performance as the senior archeologist Dr. Aryan Kulshrestha. Telugu actor Satyadev, too, was excellent. Jacqueline Fernandez and Nusrat Barucha are both appropriate in their roles. There is no song or romantic subplot… which is a great relief to many. Abhishek Sharma does a good job  as both the story writer and director. Ram Setu establishes the power of Hinduism and is a must-watch for everyone.